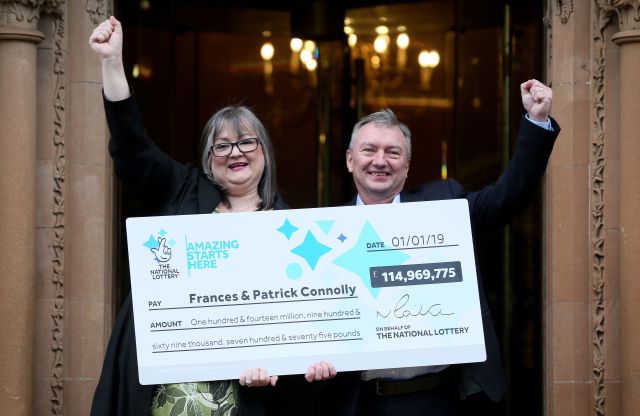 The 55-year-old in Hartlepool, England, won 115 million pounds (about $144 million in USD) in the lottery in 2019, and she’s already given over half of it away to friends, family, and charities.

Connolly has set up two organizations in the years since her and husband Patrick’s big win. The first, the Kathleen Graham Trust, is named after her mother and works to enrich communities in the cities of Strabane and Belfast in her native Northern Ireland.

The trust offers grants to groups that are already doing charitable work in the area, but are looking to expand their services and reach a wider audience. “What differentiates this charity is our engagement with the projects we help and our desire to build connections between the groups for mutual support,” the website reads. The other, the PFC Trust, has a similar grant program, and supports caretakers, the elderly, and refugees in Hartlepool.

Connolly said the act of helping others gives her a “buzz” that she can’t resist. “I’m addicted to it now,” she said, according to the BBC. The lottery winner estimated that she has donated about 60 million pounds of her fortune, teasing that she’d be worried if Patrick saw how much she has given away.

The former social worker and teacher noted that the couple’s biggest purchase was a house on several acres of land, but she rejects the idea of using their fortune for luxuries like yachts and expensive champagne. “If I had any advice for a winner … I’d say money liberates you to be the person that you want to be,” she said.

Ultimately, philanthropy is in Connolly’s very nature — she’s been volunteering since she was a child and helped set up an AIDS hotline when she was a student in Belfast — and she can’t think of living any other way. When asked why she’s happy to donate her fortune, she said, “Why wouldn’t you? I’ve done that all my life.”

You might need to be a lottery winner to match what Connolly donated, but we can all do our part.