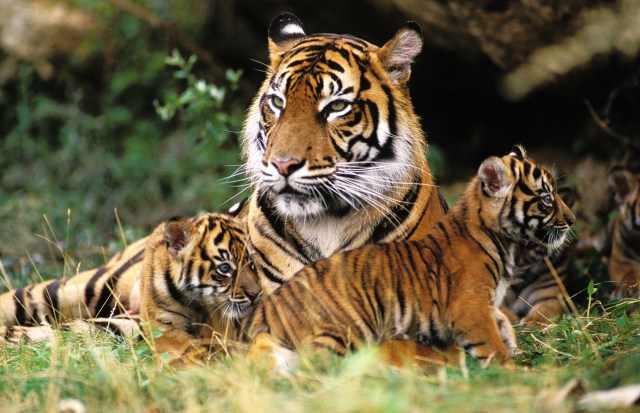 At Southern California’s San Diego Zoo Wildlife Alliance, Dr. Mrinalini Watsa has been studying DNA samples of zoo-dwelling tigers. The ripple effect of her work offers considerable potential in pulling wild tigers back from the brink of extinction by offering a means of measuring wild tiger populations with greater accuracy — and possibly curtailing the illegal wildlife trade.

All organisms shed genetic material in their surroundings: These samples are known as environmental DNA, and can be found in soil, water, snow, and the air, per CNN. Gathering this DNA from wild animals could help scientists more precisely measure populations, which in turn helps them better gauge the level of threat of species extinction and the efficacy of conservation efforts.

“Now, instead of saying we’ve seen about 40 prints in this 3-kilometer-square (1.8-mile-square) area, actually you can see those 40 prints come down to four tigers and that gives us so much more power in terms of how we go about counting them,” Watsa explained in the recent “Tiger Queens” episode of CNN’s This Is Life with Lisa Ling.

Thus far, Watsa has been successful in not only identifying Sumatran tiger DNA via footprints left in soil, but in determining the sex of the tigers that left them. Watsa intends to finetune her results to the point that she can identify distinct individual Sumatran tigers in the zoo before moving on to engage in field tests. Presently, the species is listed as critically endangered.

Although global tiger populations appear to have increased by approximately 40% from 2015 through the present, according to estimates made by the International Union for Conservation of Nature,  tigers are still categorized as endangered according to the IUCN Red List of Threatened Species. Moreover, it’s unclear as to whether populations have actually increased, or if improved tracking techniques are accounting for the apparent rise in numbers.

“More than a rebound, I’d say it’s a much more accurate estimate,” said Abishek Harihar, a deputy director at big cat conservation group Panthera. “A lot of so-called increases are more to do with better estimation methods.”

Tracking methods to date have relied heavily on remote cameras, a method that has often lacked nuance and range, according to Harihar. For instance, cameras have been difficult to place in remote mountainous regions in Southeast Asia where tigers dwell.

Watsa’s hope is that the techniques she uses may offer solutions to counter the weaknesses of camera-based monitoring. “The camera is only looking at a very small radius around it,” she pointed out, “so an animal could walk just outside of that and it would be missed entirely. This means they have a massive margin of error.”

Per the San Diego Zoo website, Watsa is also developing animal-mounted collars and microchip-based sensors. As the accuracy of tracking continues to improve, conservationists will have a much clearer picture of how wild tiger populations are faring.

There is also hope that Watsa’s method of DNA analysis, conducted on “confiscated skins, bones and animals,” per CNN, may help to locate people and groups active in the illegal tiger trade. Just this month, the U.S. Senate passed the Big Cat Public Safety Act, following its initial passing by the House of Representatives in July. The legislation limits private ownership of tigers and aims to save big cats from the illegal animal trade — offering an additional source of optimism.

With advocates like Watsa applying time, effort, and expertise to the cause, the fight to save endangered tigers is promising.