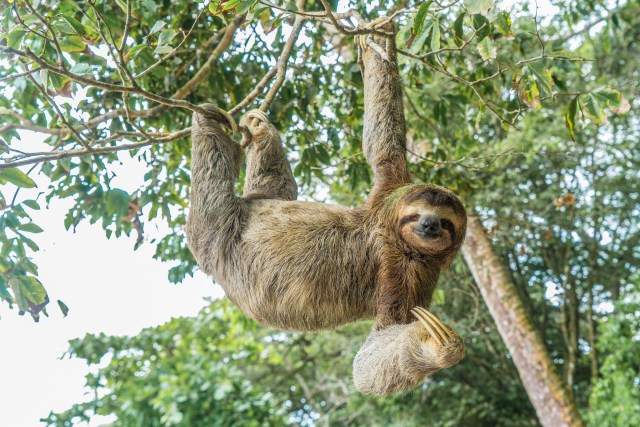 Speed walking isn’t exactly an option for sloths, which is why these animals have always relied upon a dense forest canopy to navigate their natural habitat safely. An abundance of trees has historically kept sloths relatively protected from threats like cars, electricity lines, and ground-dwelling predators.

But humans have been encroaching upon sloth habitats in Costa Rica at a rapid rate over the last decade, and ambitious urbanization efforts have resulted in a thinning forest canopy that has left sloths with no other choice but to travel along the ground — with predictably disastrous results.

“I first came [to Costa Rica] 13 years ago and it was a completely different place,” zoologist  Rebecca Cliffe told CBC. “It was wild and the roads were single lane and the trees would connect over the road — and in the last 10 years, development has gone completely out of control.”

Cliffe and her non-profit organization, The Sloth Conservation Foundation, have devised a straightforward and cost-effective solution to the crisis caused by deforestation: constructing simple rope “bridges” that run along the treeline, which help sloths avoid the multiple threats awaiting them at ground level. The bridges — some as high as around 165 feet in the air — serve as aerial crosswalks for the famously slow-moving creatures.

“There’s still a chance to reverse the damage and do things the right way.”

The Sloth Conservation Foundation’s helpers include a tree-climbing team who install the bridges. “They just tie them around the branches,” Cliffe explained.

As an added bonus, the rope bridges don’t just help sloths — they’ve become an invaluable resource to scores of other forest animals, too. Nearly 30 different species, including monkeys, lizards, and even tree frogs, have been spotted using the ropes to travel safely from tree to tree.

In August 2021, the Costa Rican government officially declared sloths to be a national symbol of the country, which will further benefit efforts to protect the species, Cliffe told CBC. The designation grants sloths “certain legal protections, including ensuring the conservation of sloths in Costa Rica and implementing aerial wildlife crossings on national routes.”

She noted that conservation efforts also benefit the Costa Rican tourism industry, which brought in approximately $1.48 billion in 2020, because spotting sloths is a huge draw for visitors.

While the impact of seemingly unstoppable urbanization and deforestation has proven disastrous for wildlife across the globe, the efforts of Cliffe and other conservationists, in Costa Rica and elsewhere, serve to remind us that there are plenty of people striving to create compassionate counterbalance. Similar wildlife crossings have sprung up around the world, including crab bridges in Australia, salamander underpasses in Massachusetts, and turtle tunnels in Japan.

“We’ve got such a good opportunity in this region to try and achieve this coexistence and balance, because it’s an area that has undergone development so recently,” Cliffe told Bloomberg. “There’s still a chance to reverse the damage and do things the right way.”

She added: “It’s not a lost cause that humans and wildlife can coexist.”