Meet the Natovenator: The First Known Swimming Dinosaur With a Mouth Full of Tiny Teeth 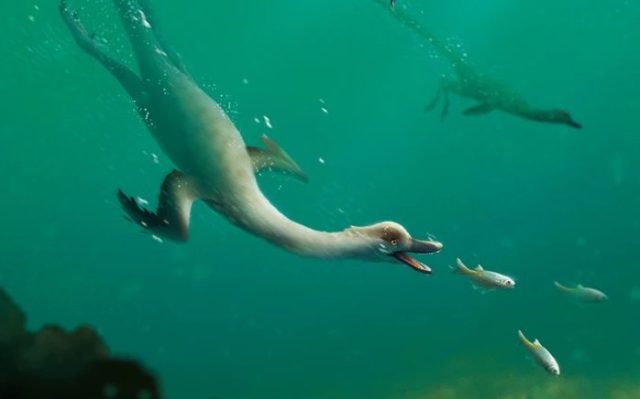 Dinosaurs that are not classified as birds walked the Earth during the Mesozoic Era, which occurred between 245 and 66 million years ago. And yet, believe it or not, researchers have never found evidence that any non-avian prehistoric reptiles ever swam. There was one exception: Spinosaurus — a humongous, fearsome beast that was able to adapt to water and even submerge itself. Still, it could not dive deep enough to be labeled as aquatic.

But now, all that has changed. Enter the Natovenator polydontus, a new species that scientists are referring to as the world’s first known swimming dinosaur, according to a study published in Communications Biology. Its name translates to the “many-toothed swimming hunter,” per Smithsonian Magazine. That’s because this small creature, which only stretched about a foot long, had a long jaw full of tiny teeth. It’s even a cousin of the Velociraptor, despite its miniscule size and slender appearance.

“We realized that this was something special, because it was beautifully preserved with a nice skull and an extremely long neck,” Seoul National University paleontologist and study co-author Sungjin Lee told Smithsonian. The fossil was found in Mongolia’s Gobi Desert at a site called Hermiin Tsav, where numerous other dinosaur bones have been found throughout history. After further analysis, Lee noted that Natovenator resembled a cormorant, a type of bird known for its expert diving. 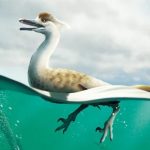 While more evidence is still needed, researchers believe the anatomy of this dinosaur suggests it was likely aquatic. For example, the lengthy jaws and little teeth might have been efficient for snagging fish. Natovenator’s ribs are also swept back like that of penguins, which could have allowed it to soar through the water. No other dinosaurs have been found to have this skeletal structure, Smithsonian reports.

Although Natovenator — which belongs to a group of dinosaurs called theropods that also includes the infamous Tyrannosaurus rex — may be the world’s first swimming dinosaur, it probably won’t be the last.

“I believe there will be more discoveries of fascinating, bizarre theropods in the future,” the study’s lead author, Yuong-Nam Lee, told Reuters. “More than 30 different lineages of tetrapods (terrestrial vertebrates) have independently invaded water ecosystems,” he added. “Why not dinosaurs?”