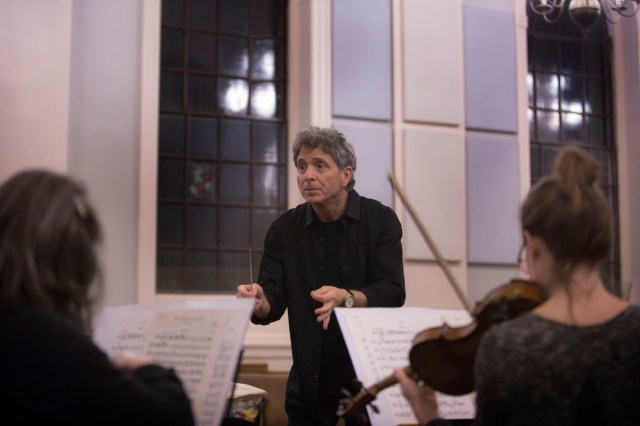 When Ronald Braunstein takes the podium, baton in hand, he isn’t merely conducting an orchestra — he’s creating an inclusive space where musicians with mental illness are both seen and heard.

Braunstein, an award-winning conductor, is the founder of Me2/, the world’s only classical music organization that was created for people with mental illnesses and those who support them in their journeys.

His idea to start the nonprofit was born out of personal experience. For years, Braunstein, who graduated from the Juilliard School of Music, traveled the world conducting music in addition to educating young musicians at his alma mater, where he served as music director.

He appeared with numerous orchestras, including the San Francisco Symphony, Berlin Philharmonic, Israel Sinfonietta, Auckland Philharmonia, Osaka Symphony, Tokyo Symphony, and the Residentie Orchestra of The Hague, according to his biography.

In 1981, a diagnosis would change the trajectory, and ultimate purpose, of his life. The talented musician — the first American to win First Prize Gold Medal in the Herbert von Karajan International Conducting Competition in Berlin, Germany, in 1979 — learned he had bipolar disorder.

Alongside his wife Caroline Whiddon, Braunstein created the Me2/Orchestra in 2011 in Burlington, Vermont, its mission being “to erase the stigma surrounding mental illness (including addiction) through supportive classical music rehearsals and inspiring performances.”

“We aren’t trying to be the greatest orchestra in the world. We are just trying to create a community.”

It “serves as a model organization where people with and without mental illnesses work together in an environment where acceptance is an expectation, patience is encouraged, and supporting each other is a priority,” the website states.

Understanding firsthand the hardships of mental illness, Braunstein’s goal was to foster a community where people are accepted, supported, and can enjoy themselves. Over a decade later, he’s composed exactly that: Today, Me2/ includes more than 160 musicians across three orchestras, chamber groups, and a Flute choir.

People of all ages and ability levels are involved, with no fees or auditions required, and performances take place in a variety of venues and locations, including recital halls, churches, prisons, treatment centers, hospitals, and gyms.

These musical showcases also tell a story beyond the beautiful music. “At a typical concert we might share some works by Beethoven and Haydn, as well as brief testimonials from musicians living with schizophrenia, bipolar disorder, or depression,” the website explains.

Attendees are invited to participate during a Q&A portion with the musicians, during which the audience can ask candid questions.

Since its founding more than a decade ago, Me2/ now has affiliates in Burlington, Boston, and Manchester, New Hampshire.

And with every new musician that joins, the organization’s mission will forever remain the same. “We aren’t trying to be the greatest orchestra in the world,” Braunstein told CBS. “We are just trying to create a community.”