Are humans inherently good or inherently selfish? Philosophers stretching back to the times of Socrates and Plato have debated human nature and its complexities. But only in recent decades have scientists and researchers started to pull back the layers on this complicated question. According to Scientific American, a set of studies conducted in 2012 by Harvard and Yale researchers determined that humans instinctively want to cooperate with others. Now, new research shows that humanity’s altruism extends to other species as well, and both our affinity and empathy for animals may begin at an early age.

In a study conducted at the University of Michigan’s child lab and published on January 16 in the journal Human-Animal Interactions, researchers examined whether toddler-age children would help dogs that wanted treats or toys that were just out of reach. A total of 97 children, 2 and 3 years old, participated in an experiment in which they were introduced to a friendly dog that was confined to an enclosure, with toys and treats placed outside of the pups’ reach.

The children helped 50% of the time when the animal expressed interest in the treat or toys. Meanwhile, they helped only 26% of the time if the dog ignored the item. Interestingly, children who lived with a pet dog were more likely to help in providing the item to the dog. Throughout the study, researchers recognized that the toddlers, even at their young ages, understood the dogs’ plights and also felt compelled to act without any reward in return. 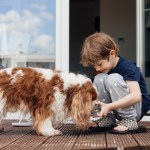 “These findings lend support to our hypothesis that children’s early-developing proclivities for goal-reading and prosociality extend beyond humans to other animals,” the study authors wrote.

In an interview with The Guardian, Henry Wellman, a senior author on the study at the University of Michigan, explained how the team’s recent research casts human behavior in a new light. “It’s been known for a long time that toddlers will go out of their way to help struggling humans, even strangers. [The study shows] it applies to other animals too, like dogs they will never see again,” he told the outlet.

On a larger scale, the study could provide insight into animal domestication and “how human capabilities for interspecies care evolved,” per the study. For years, researchers have been perplexed by the mystery of why early humans decided to domesticate animals. Perhaps, one reason is due to this early fundamental state of caring.

Dr. Rachna Reddy, lead author of the study, told The Guardian, “Animal domestication was really advantageous to human survival. It really enabled us to live and thrive, there’s a huge evolutionary benefit,” adding: “Why we came to domesticate animals is a big mystery, and this is one piece of evidence that might help us to understand that mystery.”

While the study focused solely on canines, the researchers mentioned that future studies would need to be done to examine how they react to other species like barnyard animals or cats.