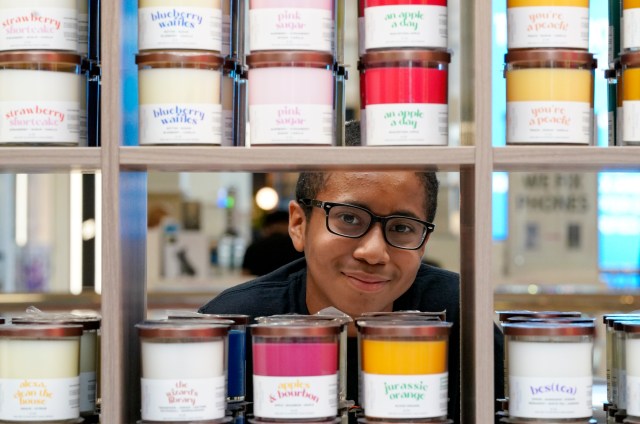 For most 12-year-olds, any free time after school is spent hanging out with friends, competing in sports, or playing video games. But budding entrepreneur Alejandro Buxton, from Fairfax County, Virginia, has another pursuit on his agenda each week: making all-natural candles that he sells online and at a local mall.

The idea was inspired by his mother, Patricia Buxton, who had to give up many of the scented candles she’d filled their home with after realizing the chemicals within them were exacerbating her allergies, causing her frequent headaches.

“My mom really loved candles, like really really,” the seventh grader told The Washington Post. “It was hard to see her sad.”

So, in 2019, at just 9 years old, he started experimenting with making his own, mixing ingredients like soy and coconut waxes with essential oils. He dubbed his first iteration “Jurassic Orange,” for its color and fragrance. Though his mother was a big fan, and the scent didn’t cause her head to ache, Buxton wanted to improve upon his work.

Within the next few months, the Post reported, he’d developed a line of six uniquely scented candles. By the following year, in the midst of worldwide lockdowns, he’d created his own Etsy shop. (How’s that for making the most of a pandemic hobby?)

Soon after, Alejandro began selling his products on his own website, “Smell of Love Candles,” where shoppers can find offerings with creative names like “Sage the Day!” and “Alexa, clean the house.” He also lists hand-dipped incense, reed diffusers, and room sprays for sale.

According to the site, his younger sister Valentina serves as assistant of operations (her contributions include “helping pass the bubble wrap during shipping operations [and] keeping everyone laughing”), while his mother assumes the role of assistant to the CEO.

Now, the enterprising youngster is operating his business in a brick-and-mortar location as well. This past September, he opened a stand in D.C.’s Tysons Corner shopping center — making him the youngest leaseholder at the mall.

Speaking to ABC 7 News at the time, his mother held back tears of pride: “I have no words, to be honest. It’s so hard to express.”

Besides inspiring fellow kids with his entrepreneurial spirit and talent, Alejandro is also a positive role model for giving back and making a difference: He donates a portion of his profits to a local charity.

He told ABC, “We can change the world by helping each other.”

RELATED: Meet the Talented 12-Year-Old Who Sells His Paintings for Charity — and Has Donated More Than $16,000: Exclusive