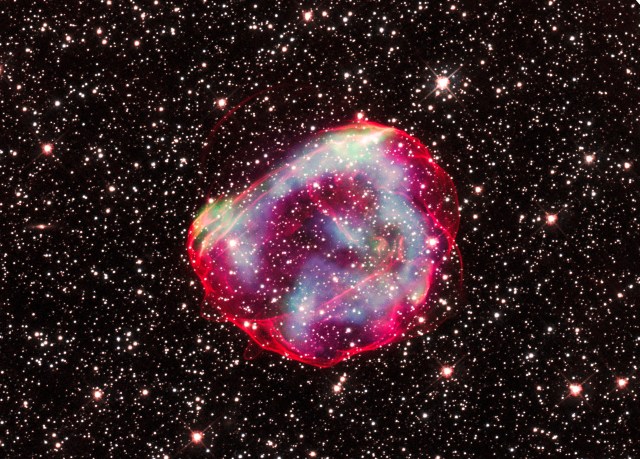 Constellations, planets, and other celestial events aren’t the only exciting things happening in the world of astronomy this month. A new study is heralding an exciting development in space sciences: a method by which a supernova — the massive explosion marking a star’s death — can be observed as it transpires in real-time.

Lead researcher Dr. Ben Davies from the Astrophysics Research Institute at Liverpool John Moores University and his colleagues, Bertrand Plez and Mike Petrault of the Université de Montpellier, shared their findings on October 13 in the Monthly Notices of the Royal Astronomical Society journal. The research pinpoints how an aging star, during its “red supergiants” or final phase of life, grows much fainter in the months prior to its death due to an accumulation of material around it.

“The dense material almost completely obscures the star, making it 100 times fainter in the visible part of the spectrum,” Dr. Davies said in a press release. “This means that, the day before the star explodes, you likely wouldn’t be able to see it was there.”

Thanks to archived telescope images of specific stars, the researchers determined that the “circumstellar cocoon” of surrounding material forms in the final year of a star’s life — “a blink of an eye considering the star was tens of millions of years old,” according to the press release.

Through noting the timing, at a point when the stars still appear normal and have not yet faded due to the surrounding material, this suggests that the cocoon is assembled in less than a year.

By simulating how this phenomenon might look, researchers were able to compare and contrast the appearance of red supergiants both before and after the accumulation of material had gathered around the dying star.

The real-world application of this newly-revealed timeline means that astronomers can now prepare for and capture the extraordinary event of a supernova.

“Until now, we’ve only been able to get detailed observations of supernovae hours after they’ve already happened,” Dr. Davies explained. “With this early-warning system, we can get ready to observe it in real-time, to point the world’s best telescopes at it, and watch the surface of the star getting literally ripped apart in front of our eyes.”