Was It Art or a Kid’s Toy? Ancient Artifacts Have Archeologists Raising Questions About Early Children’s Play 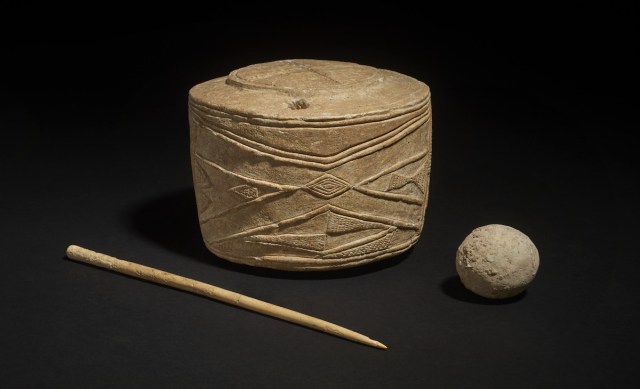 Archeologists are making headway in the study of ancient toys, a long overlooked focus in the field — one that has them asking deeper questions about children’s play in early civilizations.

Archaeologists have long studied ancient artifacts, religious motifs, and burial grounds to better understand history, and have made immense progress in the last century developing “effective methods and techniques for studying the past,” according to the Society for American Archaeology. Researchers have come across especially incredible finds while surveying children’s graves — the recent discovery of a 5,000-year-old chalk drum, found buried with three children, was dubbed “the most important piece of prehistoric art to be found in Britain in the last 100 years.”

Evidence of what could have been children’s toys and games have often been omitted — or misinterpreted — in records, though that is beginning to change.

“The child’s world has been left out of archaeological research,” archaeologist Grete Lillehammer wrote in her 1989 paper, “A Child Is Born: The Child’s World in an Archaeological Perspective,” per the BBC. The article noted that “few archaeologists have looked into the subject or given it attention, less ever thought of it as the main field of interest.”

In the case of the 5,000-year-old drum, which was found above the head of one of the children in the grave, archaeologists concluded that it was likely not a musical instrument. Jennifer Wexler, project curator of the British Museum’s exhibition where the artifact was displayed, told CNN that the drum “could have served as a toy for the children, and that there could have been wood versions that did not survive over time.” The artifact is now being regarded as more of a work of art; three “hastily-added holes” on the object may represent the “presence of the three bodies in the grave.”

Archaeologists consider context when surveying ancient artifacts, the BBC explains. Something that at first glance might resemble a child’s toy may in fact have served a different, or more practical, purpose at the time. For example, rattles have been discovered throughout the world, but some archaeologists discount them as toys because they “have been too big, and made of material too fragile, to have been convincingly used by small children.” 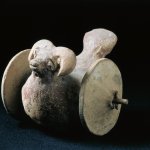 “Maybe there’s a broader context that has been overlooked, simply because children have been overlooked,” Kristine Garroway, an associate professor who focuses on children in ancient Israel and Mesopotamia at Hebrew Union College in Los Angeles, told the BBC. “And maybe it’s the grown-ups or an older child that are shaking a rattle to keep the child quiet.”

The chalk drum features elaborate and decorative motifs, a clue that it could have been more of an ornamental object. On the other hand, the drum was discovered alongside a chalk ball and polished bone pin which, on their own, would not be considered art. Thus is the dilemma of archeologists trying to imagine a child’s world long ago — but the effort is still important.

Understanding how children of ancient civilizations engaged in play may help archaeologists better understand the culture and history of those populations. That’s why the European Research Council (ERC) sponsored and financed a multimillion dollar, five-year project to “identify, categorize, and reconstruct the games and play of ancient Greece and Rome” — marking the first-ever comprehensive analysis of play and games in classical society.

The project, “Locus Ludi,” is headed by professor of classical archaeology Véronique Dasen at Switzerland’s University of Fribourg. Were toys gender-specific in ancient civilizations? Were the same games played throughout the vast, multi-ethnic region? Did historical and theological shifts affect the way children play? Dasen’s project, which started in October 2017 and will conclude on September 30, set out to answer such questions.

In 2008, the National Museum of Play awarded the distinction of “oldest toy” to the stick. Although it may never be considered an archaeological discovery, it isn’t hard to imagine a Mesopotamian child using such a simple item to play drums or draw in the sand.