Antarctica is the continent least visited by world travelers, and its frigid temperatures — with a daily interior average of minus 71 degrees Fahrenheit — make it uninhabitable for people long-term. Although the terrain isn’t suitable for humans, a delicate and complex ecosystem exists amid the ice, and now tourists who do make it to the South Pole can help preserve and study it by becoming citizen scientists during their stays.

Despite being less frequented than other areas on Earth, Antarctica has seen its tourism rate more than double over the last decade, from 33,000 visitors per year to more than 74,000. Though still relatively few people in comparison to some of the world’s biggest cities — New York City alone welcomed 33 million last year — they can make a significant impact on the snow-covered environment. In addition to increasing pollution, tourists carry an average of 9.5 non-indigenous seeds across Antarctica per person, according to a 2012 study. Caution must be taken any time a foreign species is introduced to minimize any damage to endemic plant and animal species. 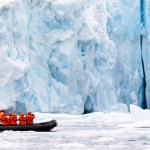 And while the remote territory offers plenty of ecological research opportunities in theory, tourists far outnumber scientists on the continent, and sending fully-funded expeditions to hard-to-reach areas can be cost-prohibitive.

The International Association of Antarctica Tour Operations (IAATO) has a creative solution: it’s inviting visitors to help protect and study the South Pole by becoming “Antarctic Ambassadors.” In collaboration with local companies and partners, IAATO encourages visitors to partake in polar expeditions that are led by experienced naturalist guides. Some of the expeditions give tourists the opportunity to observe marine life, record data about plants and flowers, track animal behavior, and learn about local cultures. And recently, the organization introduced “Beach Clean-Up Bingo.”

“Instead of passively telling visitors about the research that goes on in Antarctica, we can get them to participate through citizen science programs,” Allison Cusick, a doctoral student studying biological oceanography at the Scripps Institution of Oceanography, explained to Mental Floss. “It’s an immersive experience.” Since 2015, she and her colleagues have recruited 4,000 visiting volunteers to help investigate how melting glaciers are affecting the phytoplankton population. 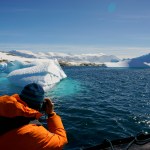 Another project, called “Happywhale,” was spearheaded by the The Polar Citizen Science Collective, and asks visitors to help assist in tracking individual whales. Participants are encouraged to set their phones or cameras to local time while whale watching and snap photos of the cetaceans, then upload them to a website. Researchers can then identify the animals by their markings.

If you’re eager to assist but don’t have an excursion to the South Pole on the horizon, you can still help scientists preserve Antarctica’s ecosystem. Aid researchers and enjoy some adorable viewing in the process by counting penguins right from your couch.