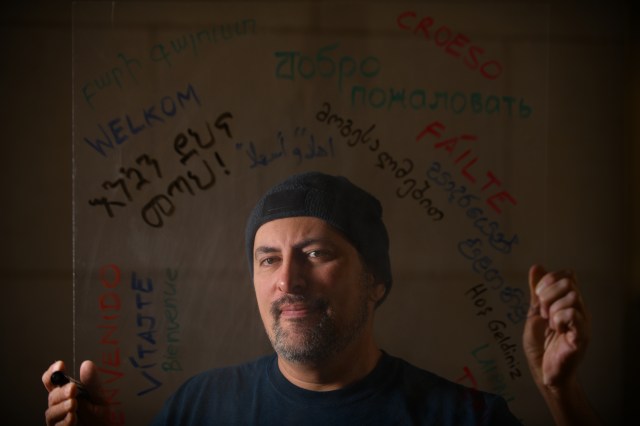 Astrid Riecken for The Washington Post via Getty Images

Vaughn Smith was bilingual from a young age, learning English from his father and Spanish from his Mexican mother. As he grew up, though, languages began to captivate him, and he soon took on many more tongues.

Now age 46, he speaks 24 languages and has a basic understanding or some familiarity with 21 others. This makes the Washington, D.C.-area carpet cleaner a hyperpolyglot, or someone with a particular mastery of languages.

Vaughn has picked up his many languages from various places over the years, he explained in an interview with The Washington Post.

He learned American Sign Language from students he met at a club that went to a school for the deaf and hard of hearing. He knows some Japanese from the staff at a restaurant where he once volunteered, and he’s been studying Salish — the language of some Native American tribes in the Pacific Northwest  — with his niece, who liked the way the word “chicken” sounded.

“You got to remember, there are very few people left, even in our tribe, who can talk Salish,” Vance Home Gun, who worked at the Salish language school that Vaughn has visited, told the outlet. “For him to know how much he does without actually being taught in our classrooms and schools or spending time with the older people who still speak it is pretty amazing.” Home Gun’s comment nods to perhaps the most incredible aspect of Smith being able to speak 24 languages — his ability to connect with so many different people he otherwise never may have.

Recently, Smith traveled to Boston to get a brain scan done by researchers at the Massachusetts Institute of Technology (MIT). What they found was that the parts of Smith’s brain used for language are smaller and quieter than average, meaning he needs less oxygen to process languages in those areas.

“He uses language so much, he’s become really efficient in using those areas for the production of language,” said MIT researcher Saima Malik-Moraleda.

Smith, who recalled feeling like he didn’t fit in most of his life in the interview, said it was “comforting” to see how excited the researchers were by his abilities. “I’m not some worthless person,” he said.