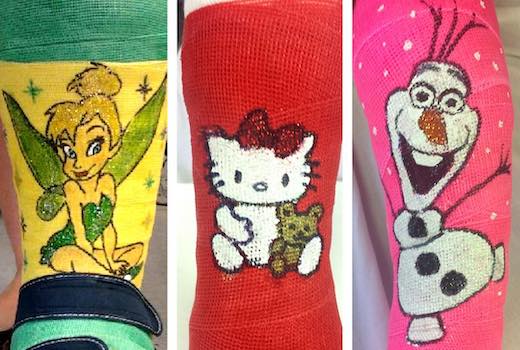 This orthopedic technician can now add “artist” to his resume. Luis Ruiz, who works at Children’s Hospital Los Angeles, transforms his young patients’ casts into adorable pieces of art.

Ruiz has painted thousands of casts over the past decade or so, customizing the plaster with everything from cartoon characters to sports teams.

And while the best part for the children may be admiring the artwork, for him, it’s seeing their smiles.

“The kids just bring me joy,” Ruiz told People. “I’m kind of a fun guy and a little kid myself inside, and I like having fun and making kids smile, and they make me smile.”

It all began “about 10 years ago, [when] a little boy asked me to draw a happy face on his cast,” he recalled. Though he was initially hesitant, Ruiz agreed after the youngster continued to insist on the drawing. He had warned him, “‘You know what, I’m really not good at drawing. I’d rather not. I might mess it up.'”

But after seeing the little boy’s reaction to his art, Ruiz became inspired to share his artistic talents with all the children in need of casts.

Ruiz has come a long way since drawing that smiley face. He began with permanent markers, but now uses oil-based paint pens as they work better on the material.

“I was not very good,” Ruiz shared. “But as time went by, little by little, I got better and better, to a point where now I can almost do anything they ask for.”

More than anything, these drawings give the children something fun to talk about “instead of having to explain what happened to them.”

One of his most memorable cast paintings was for a young girl with cancer who wanted a Wonder Woman emblem.

“It made her very happy to go around with that [drawing], because she got a lot of compliments on it,” Ruiz explained.

His work shows what a big impact a little paint can have.