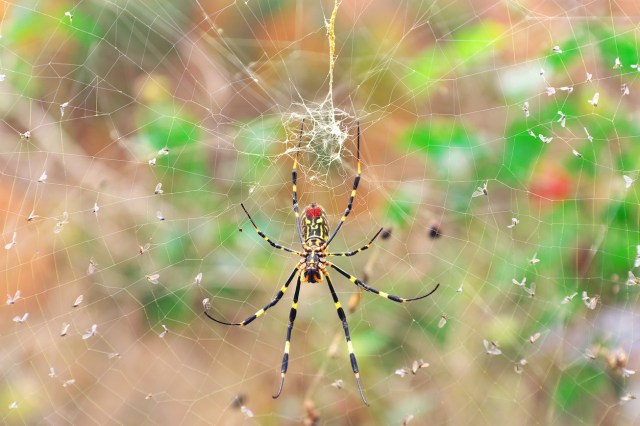 Spiderwebs have fascinated humans for centuries, and in recent years, researchers have examined whether the silk proteins could be used for fashion, medicine, and even implants and prosthetics. Now, a newly recorded behavior is shedding further light on their durability, in the first recorded instance of a spider web withstanding the weight of a bird.

On September 13, naturalist and garden expert Arty Schronce was in his Atlanta kitchen when he observed a web outside his window in Atlanta. It’s at this moment that he documented what is believed to be a scientific first, National Geographic reports. Schronce noticed a cardinal perched comfortably on a strand of a giant, golden spiderweb and feasting on some of the insects caught by the jorō spider — a large arachnid that hails from a genus of orb-weaving spiders that are known for spinning large, strong webs.

Spider silk exhibits a combination of high tensile strength, or the resistance of a material to break under tension, and the ability to stretch to great lengths — making it unique among synthetic and natural fibers. In fact, spider silk is five times stronger than steel.

Schronce called Andy Davis, an expert on jorō spiders at the University of Georgia, to tell him about the bird he observed sitting on the web. Davis studies the physiological ecology of vertebrates, but his most recent and applicable research of jorō spiders was through an elementary school science experiment with his son, Oscar. The duo found that the jorō webs could hold objects weighing up to 2.4 ounces, further confirming their ability to support a cardinal, which typically weighs between 1.48 and 1.72 ounces.

Davis told Nat Geo that when Schronce shared what he had witnessed, he “put two and two together and realized that I had data that basically showed the same thing.” He added: “To the best of our knowledge, this is a scientific first.”

The jorō spider is an invasive species believed to have been introduced to the United States in 2014 on a shipping container from East Asia, according to the outlet.

Brightly colored with a yellow, red, and black pattern, the jorō is relatively harmless to humans and pets.

The species is seen mainly in the state of Georgia, but could soon colonize colder climates, NPR reported. Although their large size can be terrifying — its leg span can grow to the size of an adult’s hand —  the arachnid can be helpful to our ecosystems. They don’t appear to disrupt natural environments or impact native species’ ecosystems, Davis told NPR; and as Schronce observed, they can serve as an additional food source to native birds and predators.

So scientists encourage citizens to leave the spiders alone and do what Schronce did: observe from a distance and capture a photograph. This will help researchers learn more about the jorō spider and arachnids in general, since this particular species spins webs in the open rather than in leaves and trees like some native species, the University of Georgia explained in a press release.
“Get to know the spider — give it a name, teach your kids what they do,” Davis said in the release. “There is a great, untapped opportunity here for jorōs to teach kids — and adults — to break the cycle of arachnophobia.”