A plucky penguin at the New England Aquarium has a new bounce in her step — or should we say her waddle — after being fitted with a pair of custom orthopedic sandals.

In 2020, a 24-year-old African penguin named Beach Donkey was diagnosed with pododermatitis, a debilitating and chronic condition common among avian species. Also referred to as “bumblefoot,” the disease can cause serious problems, including sepsis and bone infections, if left untreated. So over the past few years, animal care staff at the aquarium have developed a multi-faceted treatment plan to get her back up to speed.

In addition to medications, foot therapy, and surgeries, custom footwear was crafted for Beach Donkey. But getting the penguin to happily wear her new sandals required some buttering up by the people who know her best. 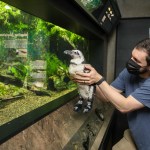 “Training an animal to be comfortable with this level of interaction and treatment requires very small steps and a positive trainer-animal relationship,” Eric Fox, the aquarium’s manager of penguins, said in a press release. “Nuanced understanding of each individual penguin and what they find reinforcing is crucial to a trainer’s success and is essential to the health of each penguin.”

For Beach Donkey, “field trips” around the aquarium served as incentives. The little bird enjoyed “novel views” by strolling through the facility to visit staff offices and view other animal habitats, allowing trainers to observe and work with her feet in a more hands-on manner.

Now, after successfully acclimating to her sandals and undergoing additional treatments, she is able to walk on hard surfaces again. Her care team considers her healed and is continuing preventative measures to keep her healthy.

And Beach Donkey isn’t the only penguin strutting around in shoes. A 4-year-old African penguin named Lucas, who lives at the San Diego Zoo, was also fitted with custom footwear after being diagnosed with the same condition.

With help from Thera-Paw, a nonprofit that designs rehabilitative tools for animals with special needs, Lucas’ caretakers created a pair of orthopedic boots to cushion his feet and prevent them from developing pressure sores. Thankfully, it worked: “Seeing him move about now gives us hope that he may be OK going forward, and able to live a full life,” Debbie Denton, senior wildlife care specialist at the San Diego Zoo, said in a press release this past August. 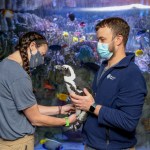 African penguins are an endangered species, with large numbers of their population recently declining due to “overfishing, habitat degradation, and oil spills,” according to the Association of Zoos and Aquariums. Both the New England Aquarium and the San Diego Zoo participate with the organization in a program called African Penguin SAFE (Saving Animals From Extinction), which supports conservation efforts and breeding programs to increase the penguins’ presence in the wild.

“Penguins are a remarkable family of birds,” said Denton. “There is no other type of animal that is so widely spread across an enormous geographic range, or displays so many unique characteristics among its members. As their numbers fall, every individual bird [matters]. It’s vital that we continue our work to ensure their continued survival for generations to come.”