In the classic 1998 rom-com You’ve Got Mail, a small independent bookstore owner and a high-powered executive who runs a wildly successful chain of mega bookstores (played by Meg Ryan and Tom Hanks, respectively) meet in an anonymous online chat room. They proceed to fall in love via a wholesome exchange of heartfelt (and still anonymous) emails before deciding to meet in person — blissfully unaware, at least at first, that they are in fact business rivals in real life. While their romance is the primary focus of the plot, the film also poignantly captures the struggles of small business owners everywhere: many pour their hearts and souls into small-scale shops and companies in a market that soundly favors their well-funded corporate competitors. It’s because of this reality that Small Business Saturday was formed.

The proverbial mom and pop shop remains a beloved underdog in our collective consciousness and culture. In a happy twist on the unexpected, though, it was a successful corporation that launched the first Small Business Saturday in an effort to showcase the unique strengths and advantages that small businesses can bring to the marketplace.

Small Business Saturday — and what evolved into the broader Shop Small Movement — was founded by American Express (AmEx) two years after the 2008 recession. The company’s intention was to inspire more customers to do their post-Thanksgiving holiday shopping with small businesses, and uplift local communities in the process, during the busiest shopping weekend of the year.

That first event was a success. The following year, in 2011, the day was co-sponsored by the U.S. Small Business Administration, and the U.S. Senate passed a resolution officially designating that Saturday after Thanksgiving —  November 26, 2011 — as Small Business Saturday. As stated by former Sen. Olympia Snowe, one of the resolution’s chief proponents, “During the busiest shopping season of the year, we should remember that our local restaurants, bookshops, and hardware stores are the economic engines in our communities.” To further generate support for the idea, the slogan “Shop Unique, Shop On Main Street” was used, emphasizing that the personal touch as well as the diversity and vitality of offerings provided by small businesses could fill a niche that corporations and their mass-produced products often can’t replicate. 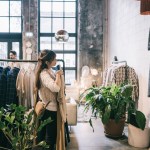 According to AmEx, the movement almost immediately blossomed on a broader level, with nationwide supporters planning events and activities around “Small Business Saturday,” aiming to bolster support for small businesses all year long.

This year, AmEx and TikTok have launched the #ShopSmall Accelerator, a program designed to provide small businesses with tools and resources to expand their reach and attract new customers on the influential social media platform. According to a recent Shop Small Impact Study conducted by the credit card service company, 67% of Gen Z users have purchased from small businesses that were advertised on their For You Page on TikTok.

As noted by the U.S. Chamber of Commerce, the COVID-19 pandemic amplified awareness of exactly how vulnerable small businesses are: countless found themselves shuttered as local spending slowed or ceased altogether in the midst of stay-at-home lockdowns and social distancing. But subsequently, consumers have become exceedingly more mindful of their purchasing power and its impact on local businesses. Today, the Shop Small Movement has not only resumed but it has happily gained momentum as a result.

RELATED: Independent Bookstores in US Are Thriving and Diversifying Post-Pandemic

Statistics show that the support is measurable and impactful. Per Rutledge, “Last year, consumers reported spending more than $23B shopping small on Small Business Saturday, and we want to exceed that in 2022.”

With the power of purposeful purchasing having found its way into the mainstream mindset, the future of small businesses everywhere looks brighter than ever.