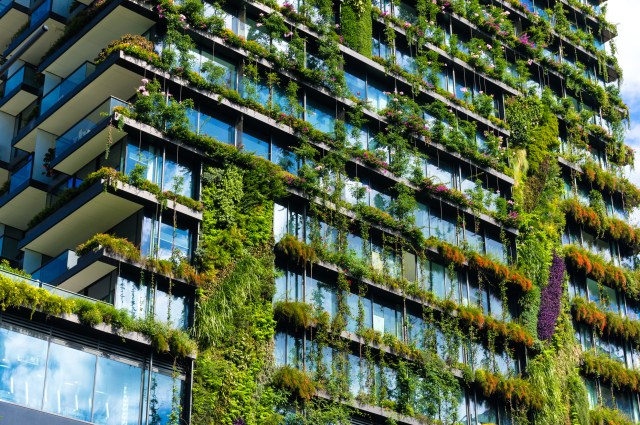 Sprucing up a concrete jungle with splashes of color and greenery can notably improve residents’ moods, a new study shows.

Science has long supported the age-old advice to “stop and smell the roses.” Exposure to nature has been shown to provide significant mental health benefits, but achieving high-quality, quantifiable data to further this research can be challenging due to the distractions that non-controlled environments present.

To account for that difficulty, professor of cognitive psychology Yvonne N. Delevoye-Turrell, along with fellow researchers at France’s University of Lille, developed an innovative experiment using virtual reality headsets to simulate greenery in an urban setting.

Her team recruited 36 healthy adult volunteers from the university’s faculty and student body to don the headsets in a laboratory and walk in place while viewing different representations of their campus. Depending on the conditions, their headsets displayed either a gray, concrete urban landscape similar to many cities or the same concrete landscape featuring greenery such as grass and trees. Bright colors were also splashed across the virtual walkways.

By tracking blink rates, heart rates, and walking speed, scientists noted what participants were most interested in as they toured the virtual campus. When the participants were in the more natural setting, their gaits slowed, and their heart rates rose, indicating a more pleasurable experience, according to the authors. The study also explains that, while they did not offer the therapeutic capabilities of adding organic greenery to cities, the splashes of color increased “fascination, curiosity and physiological levels of arousal.”

The virtual nature of the experiment is promising. “We think that the variations in human behavior obtained in virtual reality can predict the changes that would be obtained in the natural settings,” Delevoye-Turrell told The Guardian.

She plans to build on her work by creating more in-depth sensory experiences using smell and sound, and she believes a wide range of topics in the psychological sciences could benefit from the technology. The team plans to share their data sets and computer codes with other researchers.

The positive results of the study also have the potential to impact the planning and design of future urban areas. “I think that though most people appreciate nature in cities — they find it beautiful, and they usually react with anger when it’s taken away — they don’t fully understand how beneficial spending time in nature is,” Michal Matlon, an architecture psychologist and consultant unaffiliated with the study, said. “We often underappreciate the compounding effects that enriching ordinary places with nature can have.”