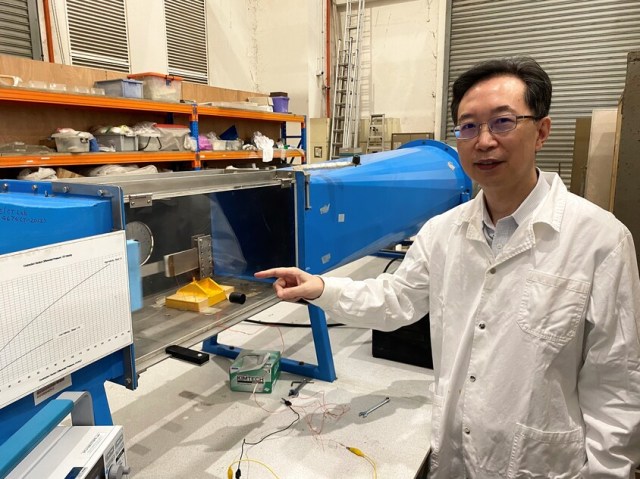 Using the wind as a means of harnessing energy is not a newfound concept — turbines have been cropping up for decades now, and wind generates nearly 10% of U.S. electricity. But scientists at Singapore’s Nanyang Technological University have developed an innovative new technology that can harness energy from the gentlest of breezes.

At just 15 by 20 centimeters, the new “wind harvester” packs a punch and is said to be “low-cost.” It’s a lightweight, durable device that can reach three volts and generate electrical power of up to 290 microwatts, according to a press release. That’s enough to power a commercial sensor and send the data from the harvester to a phone or computer, so researchers can study the boundaries of what the device can and cannot power up.

Any electricity that is not actively used can be stored in a battery and tapped into later during times when there is no wind for the device to pick up. Per the release, the scientists say it “has the potential to replace batteries in powering light-emitting diode (LED) lights and structural health monitoring sensors.”

Professor Yang Yaowen, the engineer piloting the wind harvester, said: “Our research aims to tackle the lack of a small-scale energy harvester for more targeted functions, such as to power smaller sensors and electronic devices.”

“The device we developed also serves as a potential alternative to smaller lithium-ion batteries, as our wind harvester is self-sufficient and would only require occasional maintenance, and does not use heavy metals, which if not disposed of properly, could cause environmental problems,” he added.

Much like solar panels, the wind harvester is meant to be mounted to the exterior of a building, where it can store and convert the energy collected. Most current harvesting technology, like the large turbines you may see while driving along the highway, is placed in areas with high amounts of wind. This device, however, is ideal for parts of the world that experience less wind, like many urban environments and suburbs — potentially untapped sources of renewable energy.

“[Wind energy] does not contaminate, it is inexhaustible and reduces the use of fossil fuels, which are the origin of greenhouse gasses that cause global warming,” Yang explained. “Our invention has been shown to effectively harness this sustainable source of energy to charge batteries and light LEDs, demonstrating its potential as an energy generator to power the next generation of electronics, which are smaller in size and require less power.”

Though it’s modest in size, the new wind harvester serves as a beacon of hope for a brighter, more sustainable future.