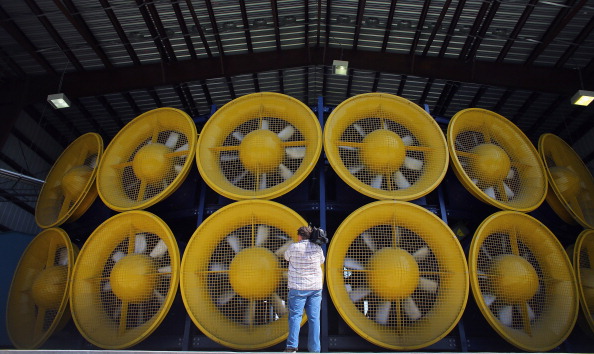 Florida knows hurricanes. The Sunshine State has been hit by some of the strongest to ever make landfall in the United States, and it’s home to the International Hurricane Research Center and the Extreme Events Institute, both located at Florida International University (FIU). There, researchers are mimicking tropical cyclones using the Wall of Wind (WOW), a full-scale testing facility able to simulate winds up to 160 mph.

And now, in response to the growing magnitude of hurricanes due to climate change, the National Science Foundation has granted FIU $12.8 million to build a new facility capable of testing wind speeds up to 200 mph, waves, and storm surges. Data gleaned from the new facility will allow researchers to help implement changes in infrastructures and natural disaster response — potentially mitigating the havoc that cyclones wreak and strengthening communities’ ability to sustain them.

Currently, the Saffir-Simpson Hurricane Wind Scale names five hurricane categories, capping Category 5 as storms with sustained wind speeds of up to 155 mph. But with beasts like Hurricane Dorian creating 185 mph winds in 2019, and Hurricane Patricia generating 215 mph winds in 2015, meteorologists have begun unofficially referring to a Category 6 — and the need for research on storms of that intensity is clear.

“We’ll have a facility that can simulate that range. It’s going to give the U.S. and the world a new capability,” Arindam Gan Chowdhury, a civil engineer at FIU and the lead researcher on the project, told National Geographic.

The facility will be called NICHE, which stands for National Full-Scale Testing Infrastructure for Community Hardening in Extreme Wind, Surge and Wave Events. Along with help from nine other universities, including Stanford and Notre Dame, NICHE will respond to “a pressing need for more resilient communities” and will help the U.S. and the rest of the world “become more sustainable while enhancing the quality of life,” said Chowdhury. The $12.8 million will be awarded over the next four years to design and build the facility.

Using what’s known as “destructive testing,” NICHE will allow researchers to mimic the effect of these Category 6 storms’ pressure on the walls and roofs of homes — and gain valuable insight from the results that could save homes and lives. That insight will enable engineers to develop safety measures and create stronger building materials, a field in which FIU has already made great strides.

Richard Olson, Ph.D., director of the Extreme Events Institute, sees the new facility as a nod to the future. “Who wants to be explaining in 20 years, ‘Ya — I knew this was coming but we didn’t do anything about it[?],” he told National Geographic.