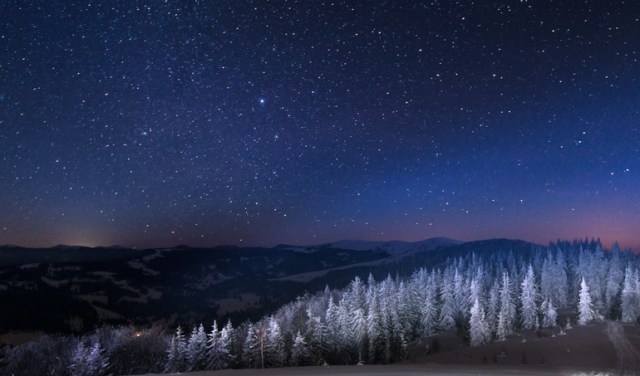 The frenzy of the holiday season has come and gone, and one great way to recalibrate in this new year is by taking a few moments to step outside and admire the expanse of the sparkling night sky overhead. The Old Farmer’s Almanac is declaring January 2023 to be “the brightest night sky of the year,” thanks to an abundance of constellations visible in the clear, crisp winter evening sky, so don’t miss your chance to bundle up and behold one or more of the spectacles noted below.

Conjunction of Venus and Saturn
Date: January 22 or 23 (varies by location)

Immediately following this month’s new moon, Venus and Saturn will be positioned about one degree apart and easy to spot simultaneously with the help of binoculars or a telescope. The sight will take place during a relatively brief window of opportunity, until the pair disappear from view below the horizon. Check out In-the-Sky.org for optimal viewing times, according to location.

National Geographic has declared this to be one of 11 “spectacular night sky events” to catch in 2023, so be sure to see it if you can.

Just before sunrise, Mercury will be at its highest point in the morning sky. Look for it low in the eastern sky, per SeaSky.org. 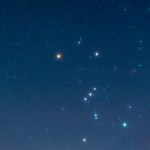 The Almanac recommends stepping outside anytime after 9 p.m. in January and February to take advantage of prime viewing time for Orion the Hunter. Orion is arguably one of the most easily identifiable constellations thanks to the three bright stars in a row within it — Mintaka, Alnilam, and Alnitak — referred to as Orion’s Belt or the Hunter’s Belt. Betelgeuse, the star that serves as Orion’s right shoulder, is the largest star in the heavens. In addition to being remarkable due to its size, it’s the only star within Orion that is a reddish-orange color — the others are blue.

Incidentally, Orion the Hunter occupies a particularly special place in the sky: because Orion’s belt is located directly over Earth’s equator, it can be seen by everyone regardless of their location.

While you’re outside looking at Orion this month, there are a number of other constellations you can spot nearby, including Taurus, the Hyades star cluster, Pleiades (a.k.a. the Seven Sisters), Auriga the charioteer, Gemini and Canis Minor.

Quadrantids Meteor Shower
Dates: January 1-5, peaking on the night of the 3rd and the morning of the 4th

According to Seasky.org, the Quadrantids is an “above average” meteor shower producing up to 40 meteors per hour. Due to the fact that it occurs when the moon is nearly full, most of its meteors will be impossible to spot, although if you’re able to stargaze from a dark location after midnight on January 4, your efforts may possibly be rewarded with a glimpse of one of the larger meteors. 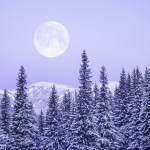 As always, the new moon offers up the best overall stargazing opportunity of the month since the lack of moonlight makes the stars and planets more visible.