Scientists Study How Whale Ancestors Saw to Understand Their Evolution 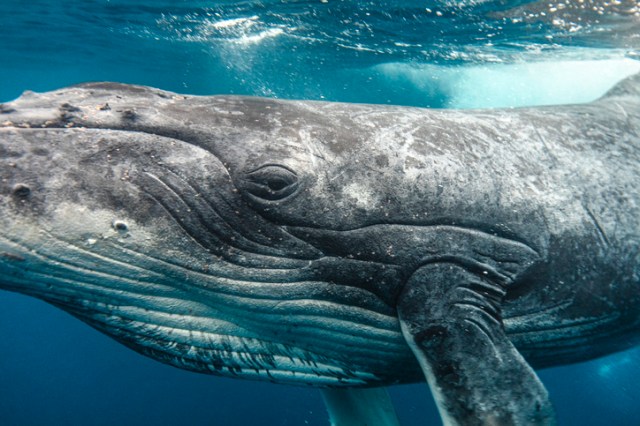 Many of us wouldn’t want to come eye to (grapefruit-sized) eye with a whale, but marine biologists at the University of Toronto in Ontario are metaphorically gazing into the eyes of the world’s largest species to glean further insight into their evolution.

Interested in how the ancestors of today’s whales behaved roughly 35 to 55 million years ago, the period directly after they transformed from terrestrial to aquatic animals, scientists used a technique that reconstructs visual proteins to study the biology of extinct animals without fossil records.

“There’s only so much you can learn from fossil evidence,” lead researcher and co-author Sarah Dungan told Hakai magazine. “But the eye is a window between the organism and its environment.”

Dungan and her team manufactured the visual pigment rhodopsin as it occurred millions of years ago by genetically altering modern mammalian cells in a lab. They then tested different types of light on the pigment to understand its sensitivity, determining that the ancient animals’ vision could adjust easily to the dark, allowing them to move quickly from sunny surface waters to the deep ocean.

These findings indicate that proto-cetaceans practiced deep-diving foraging behavior similar to today’s whales, a practice that depends heavily on eyesight, as whales cannot echolocate like dolphins.

The research has surprised some in the field who assumed these early aquatic mammals stayed close to the ocean’s surface. “Started from the bottom now we’re here,” Lorian Schweikert, a neuroecologist at the University of North Carolina Wilmington, who was not associated with the study, joked to Hakai, making a reference to the hit song by rapper Drake. While not quite the bottom of the sea, the depth that whale ancestors dove to, between 200 and 1,000 meters, is referred to as the ocean’s twilight zone.

Schweikert added that studying visual proteins is a sound approach, as they don’t change significantly over time. “You’re trying to look into the past to understand how these animals evolved. I love that we can look at vision to solve some of these problems,” she said.

The new findings build on earlier research showing that ancient cetaceans could “supercharge” the oxygen supply to their muscles while they held their breaths during deep dives, allowing for the “exploitation of the aquatic niche.” And other previously land-bound aquatic animals, like penguins, have recently been studied similarly — by reconstructing ancient protein sequences — to understand more about their breath-holding and diving capabilities.

But it’s always been whales for Dungan — she’s been fascinated by the aquatic mammals since childhood. When her father casually mentioned that the ancestors of all modern whales once lived on land, Dungan, around 8 years old at the time, was dumbstruck. Discovering more about whales’ evolutionary path “blew [her] away,” she said, adding, “The [study] is the end of a story that started when I was really young.”