How Wild Horses Could Help With Wildfire Prevention in the US 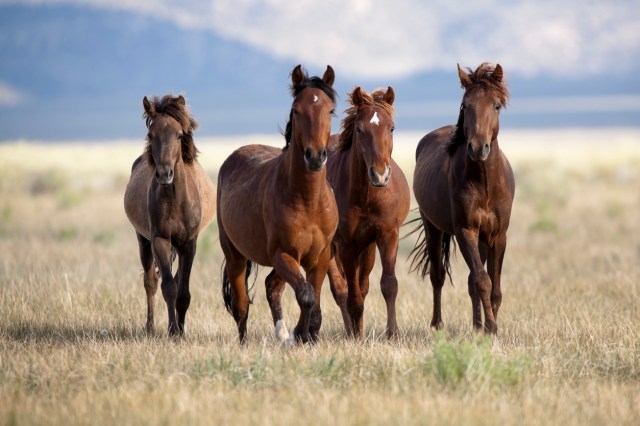 The majestic mustang, a longstanding symbol of freedom and the American West, may be an unlikely hero in the fight against wildfires.

According to the Bureau of Land Management’s (BLM) most recent estimates, there are currently about 64,604 wild horses and 17,780 wild burros roaming the western United States.

Another 58,800 are in captivity in BLM-managed facilities, thanks to the 1971 Free-Roaming Wild Burro and Horse Protection Act, which gave the bureau the right to corral and remove the animals from public lands. Some, including California naturalist William Simpson, say they should be set free to help with fires.

Simpson, a former cattle rancher and wild horse ethologist, is the founder of the nonprofit Wild Horse Fire Brigade (WHFB). He recently told NPR he wants to deploy the mustangs across public lands, where their presence can bolster the ecosystem and curtail wildfires.

He said horses tread lightly, using the same game trails as deer and elk, and trim highly flammable grass and brush as they graze. According to NPR, horses also “fireproof” trees, trimming low-lying branches or “fire ladders” by rubbing up against them.

Horses are just one of the many animals worldwide — including goats, rhinos, buffalo, hares, and even beetles — that experts say could reduce wildfires in the same way.

Moreover, while species like cattle and sheep digest most of what they consume, wild horses have a simpler digestive system that replants much of what they eat, including intact native plant seeds, through their manure. By fertilizing the soil, horse manure can also bolster forests’ health, making them more fire-resistant, according to the WHFB. And that’s not all. In reducing wildfires, horses help maintain a stable soil temperature and microbiome, enabling plants to flourish.

“Horses are like slow-moving fire brigades,” NPR host Emily Kwong recapped in the outlet’s radio episode on the topic. “Their natural behavior changes the landscape in ways that prevent wildfires from getting really big in the first place.”

According to the WHFB website, there are about 110 million acres of designated wilderness area in the U.S., primarily out west. These areas have abundant resources for wild horses but are unsuitable for livestock. If restored into their natural roles as “keystone herbivores,” mustangs could naturally benefit the ecosystem and reduce wildfire fuels, reducing both the frequency and intensity of wildfires.