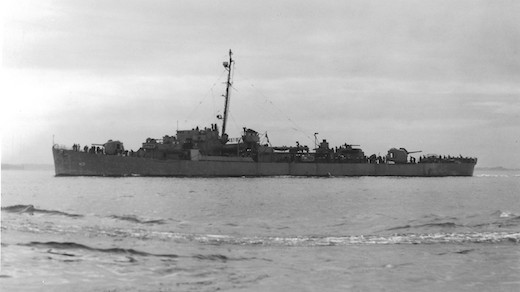 Explorers have identified the remains of the USS Samuel B. Roberts, known as the ”Sammy B” — the deepest shipwreck ever discovered. The ship, which had broken into two pieces, was located on a slope over 22,600 feet, or four miles, deep in the waters off the island of Samar, Philippines.

The U.S. Navy destroyer escort sank in October 1944 while engaged with a Japanese fleet during the Battle of Leyte Gulf, which has been called the largest sea battle in history. The wreck was discovered by Jeremie Morizet, a sonar specialist at Deep Ocean Search, and Victor Vescovo, an American explorer and founder of Dallas-based Caladan Oceanic Expeditions.

“It was an extraordinary honor to locate this incredibly famous ship and by doing so, have the chance to retell her story of heroism and duty to those who may not know of the ship and her crew’s sacrifice,” Vescovo, a former Navy commander, said in a statement announcing the discovery alongside U.K.-based EYOS Expeditions. “In difficult times, it’s important to reflect on those who sacrificed so much, so willingly, in even more difficult times to ensure our freedoms and way of life.”

Vescovo also discovered the previous record holder for the world’s deepest wreck, the USS Johnston, in the same area last year. The Sammy B was located at a depth about 1,400 feet deeper than the USS Johnson.

It was one of several small U.S. ships to take on a fleet of Japanese imperial vessels, including the Yamato, the largest battleship ever constructed. U.S. forces forced the Japanese Navy into retreat despite being outnumbered and outgunned.

After spending nearly all its ammunition, the Sammy B was critically hit by the Yamato and sank. Among its 224 crew members, 89 died. The ship was one of four U.S. vessels to sink during the battle, CBS News reported.

Samuel J. Cox, a retired admiral and director of the Naval History and Heritage Command, said in a statement that Sammy B’s commanding officer, Lt. Cmdr. Robert Copeland was honored to lead his crew into battle against tremendous odds.

“This site is a hallowed war grave and serves to remind all Americans of the great cost borne by previous generations for the freedom we take for granted today,” Cox said.

Vescovo and his team conducted six dives over eight days in search of the Sammy B and another wreck, the Gambier Bay. Their quest was a team effort involving extensive historical research led by Lt. Cmdr. Parks Stephenson, a Caladan Oceanic affiliate, and the use of cutting-edge sonar technology.

Kelvin Murray, expedition leader for EYOS, said in a statement, “It’s been [a] challenging, thrilling, and poignant expedition, one that recognizes the ships and sailors from all nations who fought so hard during this battle. We are all proud of what has been achieved and humbled by what we witnessed.”