Meet ART: The Amphibious Robotic Turtle With Limbs That Morph Into Flippers A team at Yale University took inspiration from turtles and tortoises to develop an innovative amphibious robot that can walk on land and swim — and could potentially help researchers monitor ocean ecosystems.

Called ART, or Amphibious Robotic Turtle, it’s a shape-shifting robot with legs that can morph into flippers once introduced to water, a process dubbed “adaptive morphogenesis,” per YaleNews. The robot can’t move very fast on land, and it had some difficulties climbing over sand and gravel in its first few trial runs. Researchers then went back to the animal it took inspiration from to develop a crawl-like gait that would help ART move over difficult terrain, much like how the sea turtle crawls on its abdomen over sand to reach water.

ART’s limbs are operated by ball-and-socket joints, similar to shoulder joints, equipped with three motors, Popular Science reports. These limbs can morph from the shape of a cylindrical leg for walking into an aquatic flipper for swimming, similar to the species ART is named after. Smart, soft materials were used to create its adaptable parts, including an exterior balloon that inflates to give the limbs their shape.

“Terrestrial and aquatic turtles share similar bodies, with four limbs and a shell, but have distinctive limb shapes and gaits adapted for their specific environment,” Rebecca Kramer-Bottiglio, John J. Lee associate professor of mechanical engineering and principal investigator of the study, said in a statement. “Sea turtles have elongated flippers for swimming, whereas land turtles and tortoises have rounded legs for load bearing while walking.” 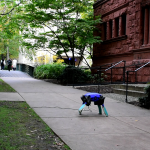 Researchers believe ART could pave the way for other kinds of amphibious innovations in the future, Robert Baines, the robot’s co-creator and an author of the study, told New Scientist.

“Although we focused on transitions between two discrete states, flipper and leg, intermediate shapes or even radically different shapes are certainly possible,” he said.

Kramer-Bottiglio and the team of researchers are hopeful that ART, and its successors, will be able to monitor ecosystems along shorelines, provide support to divers, and observe ocean farming. 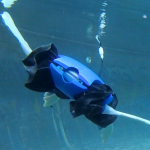 Furthermore, “the robot will also help researchers to study the physics of locomotion in the complex surf zone — where waves, currents, and turbidity make it particularly tricky for robotic devices to navigate — and other environmental transition zones,” according to YaleNews.

ART took swim lessons in a small inground pool in 2020 under the supervision of the Yale research team, and its developers have high hopes that the little robot will spread its “fins” to become a valuable asset to ocean research.

RELATED: Sea Turtles Are Swimming in Safer Oceans After a Decrease in Poaching