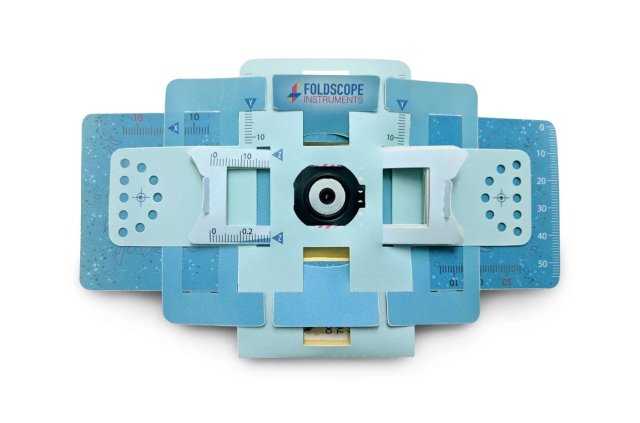 It’s difficult to determine the world’s most expensive microscope — one powerful electron microscope cost $27 million to get up and running back in 2009 — but it may be easier to call out the cheapest. The Foldscope is made of paper and costs $1.75 to produce. Don’t let the low price point fool you, though; the 2022 Golden Goose award winner is an impressive feat of engineering and is making science more accessible the world over.

It was affordability that inspired Stanford engineering professor and Foldscope co-creator Manu Prakash over a decade ago, according to an article published on the Golden Goose website. While studying infectious disease diagnostics in Thailand in 2011, Prakash began to consider how to improve testing for malaria, many cases of which go undetected, according to the World Health Organization. Early diagnosis is a key component in treatment and transmission of the disease, and one which requires analyzing samples under a microscope. There was a microscope where Prakash was working, but it wasn’t in use.

“I saw this $50,000 microscope in a jungle in the middle of nowhere, locked in a room. It was an ironic moment. I could see immediately it wasn’t the right tool,” Prakash told CNN. For one, the microscope was unwieldy — heavy and complicated to move to remote locations. It also required expensive repairs if it became damaged and could only be operated by specifically trained lab technicians, another cost.

So Prakash returned to the United States with an idea: a small, inexpensive microscope that was easy to use and make. He teamed up with Stanford graduate student Jim Cybulski and the two set about turning the vision into reality. They had a tough road ahead of them. “It took an immense amount of engineering. In that earliest phase, I was sat next to labs with million-dollar microscopes. We wanted to make a microscope at a price point of $1,” Prakash said. They called their approach “frugal science.”

With that philosophy, the two men decided that the best material to make their apparatus out of was the same stuff on which they’d sketched its design possibilities. Paper was inexpensive and sustainable, with the ability to be precisely cut and folded. Soon, they had a workable model — and a name: the Foldscope.

Today, the Foldscope does exactly what Prakash envisioned it would. With 140x magnification capabilities, it can indeed detect malaria cells for early diagnosis (though it hasn’t been approved for diagnostics in human health yet). To date, hundreds of scientific papers have been published using data collected with the paper microscope, and last year it was used to identify a novel species of freshwater bacteria.

In addition to the 1.8 million that have already been distributed across 160 countries, the tiny tool boasts an impressive and engaged online community. Members can attach the Foldscope to their phones’ cameras to capture and share their slides on a forum called Microcosmos.

Now, Foldscope Instruments, Inc. creates and sells classroom kits, provides training, and even sells swag. But Prakash isn’t about to take a breather, telling CNN: “I want to bring science into everyone’s hands.”