See the 2022 Astronomy Photographer of the Year Competition Winners: Photos

The universe is teeming with stunning wonders, most of which unfortunately cannot be seen in their full glory with the naked eye. Thankfully, though, we have astronomy photographers and their cameras to help us take it all in. The Astronomy Photographer of the Year competition, hosted by the U.K.’s Royal Observatory Greenwich, showcases the best of the best in the field, and the 2022 winners do not disappoint.

This year’s winner is Gerald Rhemann, whose shot of the Comet Leonard’s gas tail is pictured above. He took the photo from Khomas, Namibia, last December, capturing a rare image of the comet as it made its closest pass to date and left our solar system for good — meaning it won’t be seen from Earth ever again. The competition’s judges voted unanimously to give the picture the top spot.

“This award is one of the highlights of my astrophotography work,” Rhemann said in a press release shared with Nice News. “All the effort that went into making this image a success was worth it.”

Scroll down to see the rest of the winning shots, all of which are also currently on display at the National Maritime Museum in London. 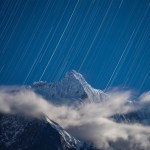 Stabbing Into the Stars © Zihui Hu

Here, photographer Zihui Hu captures Namcha Barwa, described in the release as “the most beautiful snow-capped mountain in China.” Judge Sheila Kanani said: “I love the juxtaposition of the star trails against the clear peak of the mountain. The motion of the clouds adds to the drama.” 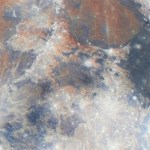 Taken from Arizona in January, this image shows the International Space Station positioned above the Apollo 11 moon landing site. According to the Royal Observatory, photographer Andrew McCarthy only had “a handful of milliseconds” to get the perfect shot. “The symbol of man, the tiny silhouette of the ISS, is dwarfed by the vast and detailed lunar surface, coloured by mineral deposits. It shows us just how fragile we are,” said judge László Francsics, while Melissa Brobby added, “This is a wonderfully original take on this category and it reminds us that we live in a time when humans have a permanent presence in space.” In the Embrace of a Green Lady © Filip Hrebenda

The northern lights, or Aurora Borealis, are on full display here. Though the natural phenomenon is usually best seen in the winter, Filip Hrebenda took the photo from Hvalnes, Iceland, in late spring. “I love this photo because it really sums up aurorae for me: the green ‘swoosh’ reflected in the icy lake, the clarity of the edges of the ice blocks and the looming shadow of the mountain,” said judge Kanani. 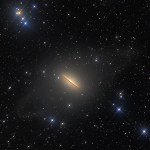 This picture taken in Pie Town, New Mexico, is actually three different versions of the same shot — “a muted version for the background, a regular version for the disc, and a super-stretched starless version for the stellar streams and halo” — that were combined into one. “The Sombrero is a well documented galaxy, yet astrophotographers still find ways to tease more majesty from it,” judge Steve Marsh shared. “To see the misty remnants of previous collisions surrounding the galaxy, itself floating alone in the void, is just exquisite.” 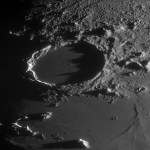 We all know what the moon looks like generally, but photos like this one offer a whole new perspective. “This close-up of the Plato crater has become one of my favorite photographs of the moon. This image of the east rim being hit by the Sun’s rays is wondrously unique and proves that, no matter how often we look at the moon, it always has many more wonderful sights for us to observe,” Brobby said. Marsh added: “I never tire of looking at craters on the moon, but this shot of Plato took my breath away with its long, sweeping shadows. If you consider the length and scale of those shadows and the mountains that create them, this image really is a deserving winner.” 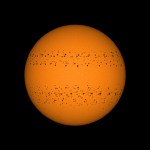 A Year in the Sun © Soumyadeep Mukherjee

Soumyadeep Mukherjee shot the sun for 365 days between December 25, 2020 and December 31, 2021, missing only six days during the entire period. He then blended the images to create the masterpiece above. “The commitment and diligence (not to mention luck) needed to image the Sun every day for a year is a feat within itself,” said Marsh. “But, more than just a matter of hard work, this photographer has achieved a fascinating and unique look at the progression of sunspot bands across its disc.” 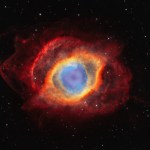 The Eye of God © Weitang Liang

The vibrant nebula pictured here has several names — the Helix Nebula, NGC 7293, or, most colloquially, the Eye of God. Judge Imad Ahmed commented: “The colors in this photograph make for a stunning composition — from the fiery red to the defiant, moody blue at the center of the ‘eye’. It’s easy to see how the ancients used to stargaze into the heavens and imagine that the cosmos was looking back, keeping a watchful eye over us.”

Young Astronomy Photographer of the Year 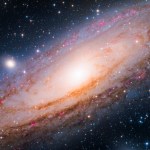 Astronomy photography has no age requirement: This picture of the Andromeda Galaxy — the most distant object the human eye can see — was taken by two 14-year-old boys, Yang Hanwen and Zhou Zezhen. “From the dark dust lanes to the HII regions, this young photographer has expertly [brought] out the galaxy’s stunning details to produce a vibrant image,” Brobby said. “One of my favorite pictures from the competition!” Pauline Woolley created an innovative piece of art using 26 images of the sun, layering them to create rings that form an “imaginary solar tree” to visualize the passage of time. Hannah Lyons, assistant curator of art at Royal Museums Greenwich explained: “Dendrochronology — the scientific method of calculating dates based on tree rings — is used by art historians and conservators to date wood panel paintings, but here the technology has been utilized to create an unusual and beautiful composition. This is an innovative photograph that immediately astonished all the judges.” 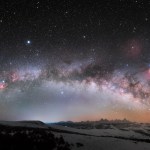 Lun Deng captured the Milky Way poised above the highest peak in Sichuan, China, the Minya Konka Mountain, in the early morning hours. “The icy, ragged mountaintop is contrasted beautifully with the Milky Way, the lighter pink and indigo hues of which offer us a mesmerizing, warm glow,” Ahmed said. “I also have to commend the photographer’s dedication — standing in the snow in freezing conditions — to capture this picture!”