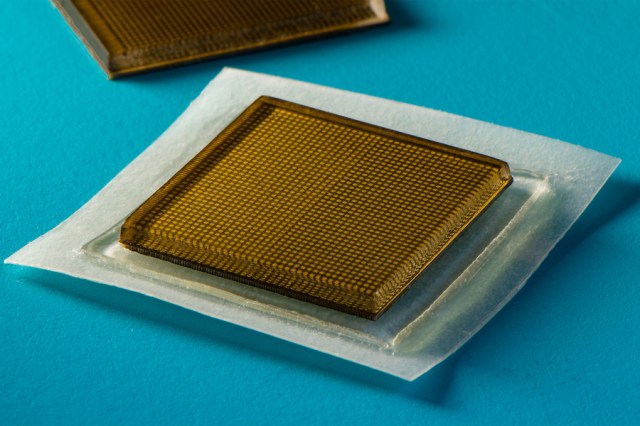 Ultrasounds, while safe and effective, require a trip to the doctor’s office or hospital, bulky equipment, and a slather of cold gel on the area to be imaged. But a group of MIT engineers hopes to change that process. The team has developed a small, ultrasound sticker that can provide continuous, high-resolution images of internal organs for 48 hours.

Current ultrasound technology only provides a momentary glimpse at the heart, lungs, stomach, or other organs being imaged as a technician moves a probe that bounces sound waves off a patient’s soft tissues to develop a two-dimensional picture. Take the probe away and the information stops, which makes certain variables or changes nearly impossible to perceive in only one visit.

Wearing the MIT team’s new, adhesive ultrasound patch, which is water-resistant and leaves no residue, volunteers were able to jog, lift weights, drink juice, and more — all while researchers watched their blood vessels, hearts, digestive systems, and muscles react in real-time. The results of the study were published in Science.

Other wearable ultrasound patches have previously been developed, but “the resolution and imaging duration of existing ultrasound patches is relatively low, and they cannot image deep organs,” said Chonghe Wang, one of the study’s authors, said in a press release. He and his team created their patch, which is about the size of a postage stamp, using 3D printing, laser micromachining, and photolithography. The entire creation process only takes a couple of minutes, Wired reported.

The patch’s thin, rigid top layer and the adhesive bottom layer are made from elastomer, while a middle layer of hydrogel transmits the sound waves. “This combination enables the device to conform to the skin while maintaining the relative location of transducers to generate clearer and more precise images,” Wang said.

The technology is not yet wireless — to see and interpret the images, the researchers had to connect to an imaging system via long cables that allowed the volunteers wearing them to move around. But others in the field are still impressed by the study’s implications. Lawrence Le, who runs an ultrasound and imaging laboratory out of the University of Alberta, told Wired the results are “very exciting.” He believes wireless capabilities are not far off for something like this: “It’s getting there,” he said of the technology needed.

The MIT team is also optimistic that the stickers will one day connect to wifi to be used for long-term monitoring from a patient’s home. “We envision a few patches adhered to different locations on the body, and the patches would communicate with your cellphone, where AI algorithms would analyze the images on demand,” Zhao said. “We believe we’ve opened a new era of wearable imaging.”

Check out a video of the ultrasound sticker in action.