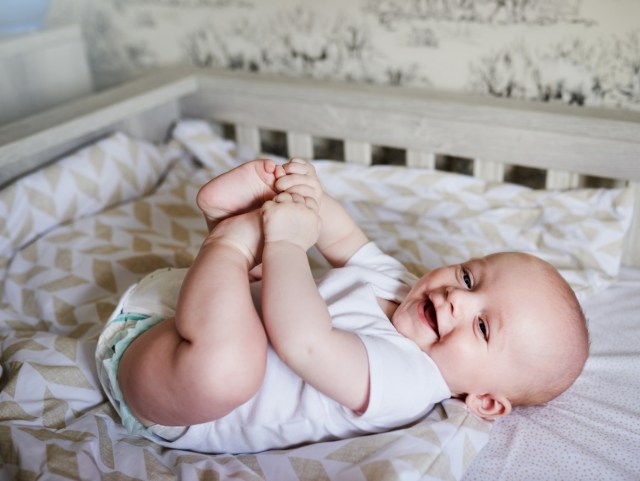 It starts with acrobatic kicks and somersaults while still inside the womb, and progresses after birth to a never-ending stream of wiggles, wriggles, flailing arms, and jerking legs. When they’re not sleeping, babies certainly seem to always be on the move, long before they’re actually crawling or walking. And new research coming out of the University of Tokyo has determined that these seemingly purposeless movements are actually anything but.

In a recent study, published in The Proceedings of the National Academy of Sciences (PNAS) this past December, shines a light on how the random exploratory behavior of newborns and babies plays a critical role in their ability to later perform deliberate sequential movements.

The research team utilized detailed motion capture of newborns and young infants and combined that information with a musculoskeletal computer model to study how their muscles and sensations communicate throughout their entire bodies.

Prior to the study, knowledge of how newborns and infants learn movement had been limited. Project assistant professor Hoshinori Kanazawa, from the Graduate School of Information Science and Technology, explained how the new research has expanded awareness of how babies learn to control their muscles and movement, and develop coordination, which is the function of the sensorimotor system.

“Previous research into sensorimotor development has focused on kinematic properties, muscle activities which cause movement in a joint or a part of the body,” Kanazawa stated via a press release.  “However, our study focused on muscle activity and sensory input signals for the whole body. By combining a musculoskeletal model and neuroscientific method, we found that spontaneous movements, which seem to have no explicit task or purpose, contribute to coordinated sensorimotor development.”

The research team first developed a whole-body, infant-scale musculoskeletal computer model. They next used motion capture technology to record the joint movements of 12 healthy newborns and 10 young infants, which provided data that allowed the team to estimate the babies’ muscle activity and sensory input signals. From there, computer algorithms made it possible to analyze interaction between the input signals and muscle activity.

“We were surprised that during spontaneous movement, infants’ movements “wandered” and they pursued various sensorimotor interactions. We named this phenomenon ‘sensorimotor wandering,’” said Kanazawa, later adding that the “results implied that infants develop their own sensorimotor system based on explorational behavior or curiosity, so they are not just repeating the same action but a variety of actions. In addition to this, our findings provide a conceptual linkage between early spontaneous movements and spontaneous neuronal activity.”

These findings may eventually allow doctors to diagnose developmental disorders much earlier than is currently possible. The team also hopes to study how these early movements impact later development, “such as walking and reaching, along with more complex behaviors and higher cognitive functions,” per the press release.

For Kanazawa, the goal “is to understand the underlying mechanisms of early motor development and to find knowledge that will help to promote baby development.”