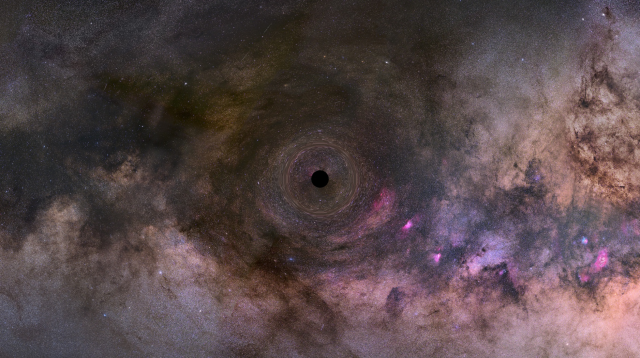 If you think pinning down the position of a black hole sounds complicated, you can imagine how much harder it is to identify one moving 100,000 miles per hour — which makes astronomers’ recent feat so impressive.

For the first time ever, data from NASA’s Hubble Space Telescope has allowed scientists to record the mass and location of a traveling black hole, the space agency reports.

Some supermassive black holes are thought to hold court at the center of galaxies, like the Milky Way’s resident centerpiece, Sagittarius A*. Others, called Stellar-mass black holes, form when giant stars, at least 20 times more massive than the sun, explode. These heavy-weights are typically observed hanging out with companion stars. Sometimes, though, the force of a giant star’s detonation catapults the resulting black hole into a high-speed, wayward journey through space. Astronomers estimate there are over 100 million of these moving objects in our galaxy.

Previously, the phantom objects have only been surmised through statistical inference — scientists have deduced their presence by observing surrounding matter.

Using ground-based telescopes, astronomers attempt to identify roving black holes by looking for brightening stars, which indicate light deflection as massive objects pass in front of them. When these events are deemed noteworthy, Hubble is able to provide more precise information.

In this case, two signatures of a black hole were present. The duration of the event stretched out for over 200 days due to the immense gravity of the passing object. And no color changes were observed. If the passing foreground object had been a star, the blending of the background and the foreground starlight would have resulted in a fleeting change in hue.

Two teams of scientists investigated the occurrence using Hubble’s precise data. Employing a technique called astrometric microlensing, they measured the deflection of the background star’s light. That information gave them insight into the black hole’s mass, distance, and velocity.

Kailash Sahu led a team from the Space Telescope Science Institute in Baltimore, Maryland. They estimated that the passing object weighs as much as seven solar masses and travels 100,000 miles per hour. Casey Lam, from the University of California, Berkeley, led the other team..

Their results differed slightly. Lam’s team estimated the object’s mass at between 1.6 and 4.4 times that of the sun. The lower end of that estimate would mean the object is more likely a neutron star, while the higher end would indicate a black hole.

“As much as we would like to say it is definitively a black hole, we must report all allowed solutions. This includes both lower-mass black holes and possibly even a neutron star,” said Berkely team member Jessica Lu. Lam added, “Whatever it is, the object is the first dark stellar remnant discovered wandering through the galaxy unaccompanied by another star.”

The newly recorded object is 5,000 light-years away from Earth in the Carina-Sagittarius arm of the Milky Way, but astronomers estimate that the closest stellar-mass black holes could be just 80 light-years from our planet. For context, Earth’s nearest star is four light-years away.

The findings also promise to further our knowledge of these giant masses’ prevalence in our galaxy. “Detections of isolated black holes will provide new insights into the population of these objects in our Milky Way,” Sahu said.