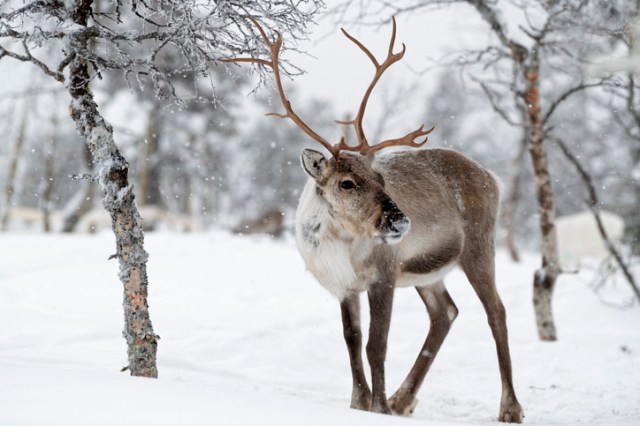 It’s hard to imagine Santa Claus without his nine flying reindeer. But although the real-life St. Nicholas’ roots date back to the fourth century and Greco-Roman Lycia, the notion of the legendary character’s sleigh, and the magical creatures that drive it, is relatively new.

The first mention of a sleigh as Santa’s mode of transport appeared in 1812, according to the Hearthstone Historic House Museum. Using the pen name Diedrich Knickerbocker, author Washington Irving wrote a revised version of A Complete History of New York and described St. Nick “riding over the tops of the trees, in that self-same wagon wherein he brings his yearly presents to children.” The reindeer, however, didn’t appear until 1821, when printer William Gilley published a booklet titled A New Year’s Present, to the Little Ones from Five to Twelve Number III: The Children’s Friend.

It contained an illustrated poem “Old Santeclaus with Much Delight.” Written by an anonymous author, it was the first to mention reindeer, according to the museum and ABC 7 News. It reads:

“Old Santeclaus with much delight
His reindeer drives this frosty night.
O’er chimneytops, and tracks of snow,
To bring his yearly gifts to you.”

Gilley mentioned in an interview the following year that the author — who remained unnamed — had elaborated on the reindeer in correspondence with the publisher, according to the museum website. “He stated that far in the north near the Arctic lands a series of animals exist, these hooven and antlered animals resemble the reindeer and are feared and honored by those around,” he wrote, adding that the author’s mother, an Indigenous person of the area, had mentioned the animals’ ability to fly. Per the museum, knowledge of reindeer as draft animals in the Arctic was widely known by the 19th century.

Also in 1822, Episcopal minister Clement Clarke Moore named and popularized the reindeer with his now-famous poem, “An Account of a Visit from St. Nicholas,” according to History.com. Better-known as “’Twas the Night Before Christmas,” the poem established the now-iconic image of Santa as a “right jolly old elf” with magical abilities and a reindeer-driven sleigh. In one verse, according to ABC 7 News, Moore named the original eight reindeer: Dasher, Dancer, Prancer, Vixen, Comet, Cupid, Dunder, and Blixem. The latter two, which mean “thunder” and “lighting” in Dutch, were later changed to Donner and Blitzen, per the outlet. The Dutch monikers align with modern-day Saint Nick’s evolution from the Dutch Sinterklaas, which Dutch immigrants brought to New York in the mid-16th century, according to LearnDutch.org.

As for Rudolph, now “the most famous reindeer of all,” he is also the youngest. Robert May, a copywriter, created the beloved red-nosed reindeer in 1939 in a “Christmas-themed story-poem” intended to boost sales at the Montgomery Ward department store in Chicago, according to History.com. The tale was an instant hit, selling nearly 2.5 million copies of the story in the first year and over 3.5 million copies upon reissue in 1946.