London Museum, Oxford University to Return Looted Artifacts From 1897 Back to Nigerian Government 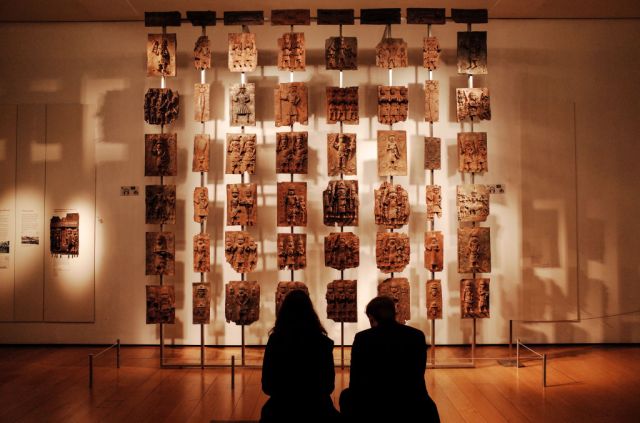 In 1897, British forces looted thousands of artifacts during a raid on Benin City, Nigeria. Over a century later, some of those treasures, known collectively as the Benin Bronzes, will finally be returned to their rightful owners.

The Horniman Museum and Gardens in London will transfer ownership of 72 objects, including brass plaques, ceremonial ivory, and everyday items like fans and baskets, to Nigeria — making it the first government-funded institution to do so. Last year, a Scottish university museum and a private museum in Berlin, Germany, pledged to return their collections of Benin Bronzes. And more recently, Cambridge and Oxford universities joined them, agreeing to relinquish around 200 artifacts.

The thousands of other stolen pieces are currently held by 165 museums and many private collections across the globe, The Guardian reports. The British Museum in London has the most extensive collection, with 900 of the stolen items in its possession.

Though the Nigerian government has been seeking the return of the Benin Bronzes for decades, the country’s National Commission for Museums and Monuments formally requested the items from the Horniman in January. After conducting research and consulting with “community members, visitors, schoolchildren, academics, heritage professionals and artists based in Nigeria and the UK” to make its decision, the Horniman’s board of trustees unanimously voted to return the objects.

“The evidence is very clear that these objects were acquired through force,” ​​Eve Salomon, chair of the trustees of the Horniman Museum and Gardens, said in a statement, “and external consultation supported our view that it is both moral and appropriate to return their ownership to Nigeria.” She added: “The Horniman is pleased to be able to take this step, and we look forward to working with the NCMM to secure longer term care for these precious artifacts.’’

Once returned, the objects will be housed in the Edo Museum of West African Art, which is set to open in 2025 in Benin City.

In recent years, other artifacts illegally taken from their countries of origin have been returned as well. The Brooklyn Museum gave more than 1,300 artifacts back to Costa Rica, a private collector turned over a Mayan emblem to Guatemala, and the Rubin Museum in New York agreed to return a pair of 14th- and 17th-century wooden carvings to Nepal.

Even more significant than those individual decisions, the Smithsonian Institution adopted an official restitution policy this April. The institution-wide initiative establishes guidelines for each Smithsonian museum when items are determined to have been unethically sourced.

“There is a growing understanding at the Smithsonian and in the world of museums generally that our possession of these collections carries with it certain ethical obligations to the places and people where the collections originated,” Smithsonian Secretary Lonnie Bunch said in a statement. “Among these obligations is to consider, using our contemporary moral norms, what should be in our collections and what should not. This new policy on ethical returns is an expression of our commitment to meet these obligations.”