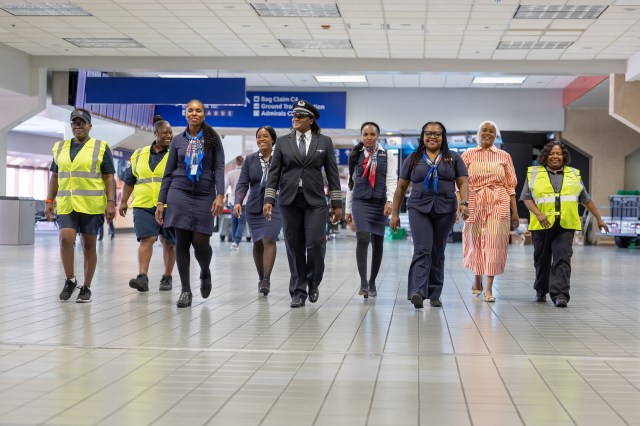 In 1921, Bessie Coleman became the first Black woman to earn a pilot’s license. And now, over 100 years later, American Airlines has honored her achievement with a historic flight from Dallas, Texas, to Phoenix, Arizona, run by an all-Black, all-female crew.

Aboard the flight was Coleman’s great-niece, Gigi Coleman, president of the Bessie Coleman Aviation All-Stars, a nonprofit dedicated to promoting STEM, teaching aeronautics, and introducing students to the many careers in aviation. 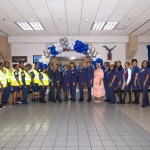 “Bessie Coleman was such an advocate. And today, we all are Bessie Coleman,” said Dr. Sheila L. Chamberlain, the organization’s national chairperson, in a video released by the airline. “Her dream has been fulfilled.” Dr. Chamberlain holds a great distinction of her own: she was the first Black woman to become a combat intelligence pilot in the United States Army.

The 36-person crew was led by Capt. Beth Powell, who said, “today, I’m beyond thrilled to be a part of the crew where we’re inspiring young girls, young girls of color, to see the various roles that these women play in every aspect to make this flight possible.” Those roles included members of the cargo team, an aviation maintenance technician, and the gate agents, as well as the flight attendants and pilots. 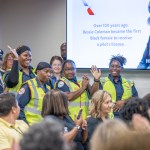 According to the airline’s news release, Black women represent less than 1% of pilots in the commercial airline industry, making the flight all the more momentous in the path toward diversifying the field. “I’ve been a flight attendant for 55 years, and I am blown away,” said Cheryl Gaymon. “It makes me feel good.”

Born in Atlanta, Texas, Coleman moved to Chicago at 23 before realizing she wanted to fly planes, intrigued by the exploits of World War II pilots, according to PBS. After facing discrimination by flight schools in the United States based on her race and gender, she set off to study in Paris. She was the only person of color in her class and learned to fly in a 27-foot biplane known to fail during flight, but she achieved her goal just seven months after enrolling and was awarded an international pilot license.

Speaking at the celebration, Jim Moses, American Airlines Vice President of DFW Operations, said: “Bessie Coleman, as you’ve heard, was a trailblazer for our industry, and we’re a stronger airline today because of her accomplishments.” He added that  “she made way for some of our most accomplished aviation professionals, that’s why this honorary flight today is so important.”