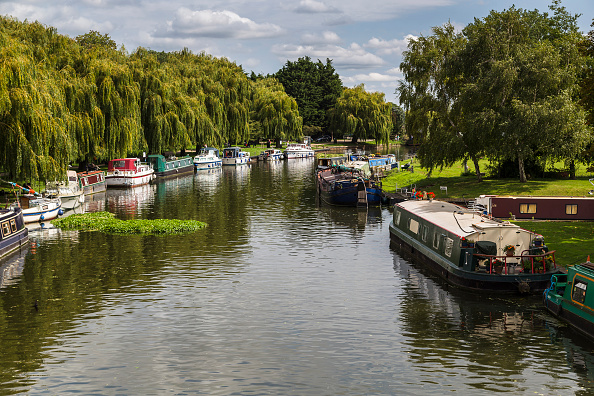 While it’s often said that not all heroes wear capes, a few in the vicinity of the Borough of Bedford in Bedfordshire, England, do wear scuba tanks, as Emma Lyon can attest.

On May 7, Lyon was attending a regatta and had been cheering on a local race participant with such enthusiasm that the ring on her finger flew into the River Great Ouse. The inadvertent ring toss was made all the more heart-wrenching given that it was a family heirloom: a gold band that had previously belonged to Lyon’s grandmother, the Bedford Independent reported.

Reasonably assuming that her treasure was gone forever, Lyon was prepared to accept her loss with grace. “The ring belonged to my grandmother, who died in 2000 aged 100,” Lyon explained. “She worked at a corn merchant on Caldwell Street and would sometimes get up early and take the family’s punt out on the river before work. I did think that if we couldn’t find the ring, it had ended up in a fitting resting place.”

But, as often happens, fate had other plans.

A friend of Lyon’s suggested that she contact a local diving club, the Bedford Scuba Divers, to see if anything might be done. On Sunday evening, the day after the wedding ring was lost, Lyon emailed the divers to relay her dilemma — and she would soon find herself surprised by the swiftness with which an aquatic cavalry came together to initiate a rescue.

Next came a lightning round of civic due diligence. “We had to inform all the relevant authorities before we could get in the river,” explained Martin, “So were quickly in contact with the Environment Agency, police and fire teams as well as Bedford Borough Council.”

All rallied in record time and the administrative requirements were quickly cleared. By early evening on Monday, the divers commenced their efforts to rescue the wedding ring.

Accompanied by a flashlight and the impeccable guidance of Lyon’s husband, who was able to recall the precise location of where the ring was lost, Peters was the one to spot and retrieve the underwater heirloom.

Having never expected her grandmother’s ring to be returned to her finger, Lyon treated the dive crew to drinks at a local pub in celebration of their victory. “I am just so, so grateful to everyone from the scuba club who gave up their evening to help out and cannot believe that Matt was able to find it,” she said. “It was a total miracle.”