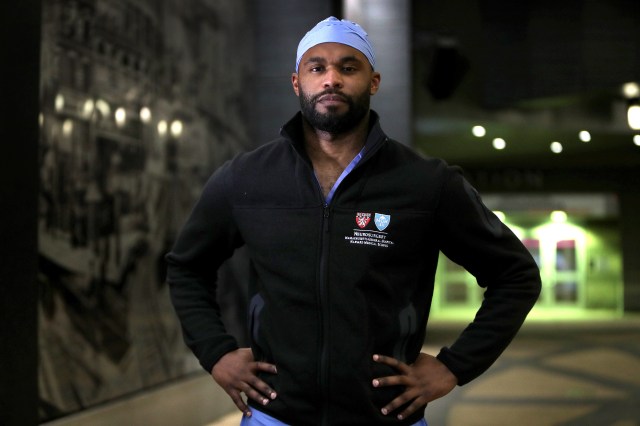 Myron Rolle’s secret to achieving his myriad accomplishments — being named a Rhodes Scholar to study at Oxford, playing in the NFL, and becoming a neurosurgeon — is taking things one step at a time.

He spent two seasons in the NFL, with the Tennessee Titans and the Pittsburgh Steelers, and is now a senior neurosurgery resident at Harvard Medical School, according to USA Today. His next stop will be a residency at Massachusetts General Hospital before he pursues a one-year fellowship for pediatric neurosurgery.

He details his journey in his recent book The 2% Way: How a Philosophy of Small Improvements Took Me to Oxford, the NFL, and Neurosurgery. Part memoir, part motivational manual, the book describes how his principles of hard work, faith, and family values brought him to prestigious schools, earned him scholarships, and launched his career in the NFL and medicine.

His philosophy? Aim for small, daily improvements rather than revolutionary changes and watch how — with persistence and faith — they transform your life. He models handling obstacles with grace, never resting on your laurels, and aligning to a path of purpose.

“I said, ‘Look, I have to keep moving forward, 2% at a time, keep pressing,’” Rolle told The Tallahassee Democrat, explaining how he got through life’s harder moments. “Then when you actually sit back and write about it and you start to think about your feelings, emotions and thoughts through that and how other people may face the same challenges. It really puts everything back into perspective.”

He continued: “I think we wanted to make this book one where you can find yourself in my story, in my journey and then take from it the 2% way process of improving yourself, edifying yourself daily and mitigating some of those challenges we all face.”

Rolle, who learned the 2% philosophy from his college football coach, has always pursued the extraordinary. Growing up in New Jersey, he was a star football player and was offered about 80 scholarships before attending Florida State University, where he received the prestigious Rhodes scholarship. He then delayed his career in the NFL to get a masters in medical anthropology at Oxford University.

It’s an understatement to say that Rolle has both brains and brawn. Yet his down-to-earth, genuine, and kind nature is what makes him so relatable.

“The self-doubt, the insecurity, the family issues, the spiritual dilemma, the workplace challenges. That’s why I think the value of the 2% way is so important. They [readers] really get a deep dive into some of my mental inner workings during a time when the hardest moments hit,” he told The Democrat.

Rolle’s work as a philanthropist might just be the most inspiring part of his story. As a doctor, he was on the frontlines of the coronavirus pandemic, was part of the Global Disaster Response Team for Hurricane Dorian in The Bahamas, and created a foundation to help bring health and healing to the most vulnerable.

The foundation includes a wellness and leadership academy for foster children, plus an initiative to address systematic healthcare gaps in Caribbean nations by improving policy, clinical advancement, and the surgical system.

His mission is to help improve the lives of as many people as possible. “Walk, talk, and act like you have a future,” the foundation’s website reads.