It can track workouts, improve sleep, and provide easy access to all your favorite phone apps. And now, Apple’s smartwatch can also help you accurately monitor and manage atrial fibrillation (AFib), a condition that increases the risk for stroke, heart failure, and other heart problems.

The AFib History feature is included in the watchOS 9 update, set to be released in fall 2022. It’s been cleared by the Food and Drug Administration (FDA) for use by those who have been diagnosed with AFib and are age 22 and older.

The feature may play a role — alongside health care providers —  in managing this often undetected and asymptomatic condition. It works by monitoring heart rate and rhythm in the wearer, estimating how long a person was in AFib, and producing a weekly report that’s accurate enough to share with the user’s doctor.

“While there is still research work to be done to best understand how to use these devices to monitor AF, the data to date has been helpful in showing us that the devices can detect AF in both symptomatic and asymptomatic individuals,” Dr. Robert Harrington, M.D., an interventional cardiologist and the chairman of the department of medicine at Stanford University, told Verywell Health, adding that the update is a “welcome” change when it comes to monitoring AFib, as well as other cardiac arrhythmias and chronic diseases.

A study at Stanford University School of Medicine, funded by Apple, found that “34% of Apple Watch wearers who received an irregular pulse notification were identified as having AFib on a subsequent ECG patch reading,” VeryWell Health reports.  And this isn’t the first time Apple Watches have helped people avoid dangerous heart complications.

The update builds on Apple 4’s electrocardiogram (ECG) app which has been helping wearers for years. 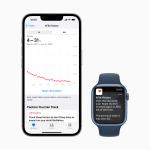 In fact, this app saved 46-year-old Ed Dentel’s life in 2018. Healthy, athletic Dentel had installed the ECG app in order to play around with it, and was surprised when it indicated immediately that there was a problem with his heart.

“The application on the launch sounded off right away with atrial fibrillation — not something I’ve ever heard of, but since I’m in pretty decent health and never had a problem before, I didn’t give it much thought. I figured something was glitchy, so I set everything down [and] turned in for the night,” Dentel told ABC News.

It turns out Dentel did have the condition and was later placed on medication. “This thing may have just saved your life,” he recalled the doctor saying.