Scientists May Have Found the Youngest-Known Planet 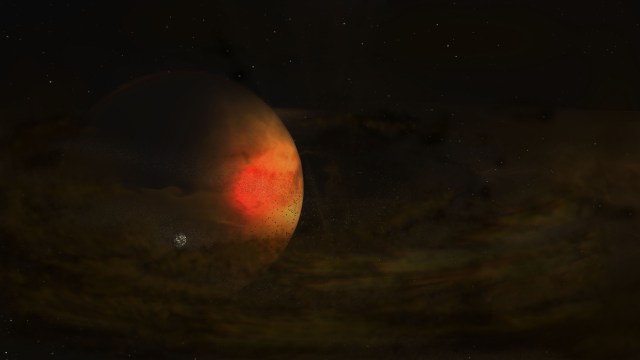 Astronomers have detected evidence of what appears to be one of the youngest-known planets in the universe.

In the journal The Astrophysical Journal Letters, scientists detailed the first-ever detection of gas in a circumplanetary disk, suggesting the presence of a Jupiter-sized exoplanet in the constellation Ophiuchus, 395 light-years away from Earth.

This newborn planet is estimated to be only 1.6 million years old and is so young that it’s still in the process of forming.

The discovery was made as scientists, who were using the Atacama Large Millimeter/submillimeter Array (ALMA) telescope to study young star AS 209, “observed a blob of emitted light in the middle of an otherwise empty gap in the gas surrounding the star” that led to the detection of the disk and suspected new planet.

It is only the third confirmed detection ever of a circumplanetary disk, which is composed of gas, dust, and debris, and orbits around young planets — eventually forming moons and other rocky objects.

“The best way to study planet formation is to observe planets while they’re forming. We are living in a very exciting time when this happens thanks to powerful telescopes,” Jaehan Bae, a professor of astronomy at the University of Florida and the lead author of the paper, said in a press release from the National Radio Astronomy Observatory.

And the discovery itself isn’t the only exciting part: The James Webb Space Telescope will hopefully determine the new planet’s mass and atmospheric chemistry in the near future, giving scientists further insight about our own solar system.

“It is like looking at our own past,” Myriam Benisty, an astronomer at the Institute of Planetology and Astrophysics of Grenoble in France and a co-author of the study, told The New York Times.

While the possible planet is currently still in progress, scientists are optimistic that future telescopic observations will soon confirm its existence.