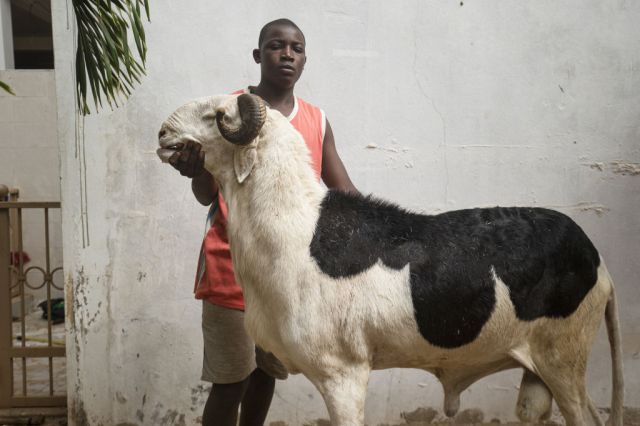 Recently proclaimed to be “the world’s most expensive sheep” by National Geographic, the Ladoum sheep of Senegal compete in annual televised beauty pageants and are known to fetch upward of $10,000 each. In some cases, it’s considerably more: a purchase price of just over $80,000 was allegedly once recorded.

To be sure, Ladoum sheep are majestic in appearance. The largest can weigh up to 400 pounds and stand 4 feet tall. Distinguished by “good looks, tall stature, prominent muzzles, and curved horns,” among other traits, this hybrid breed was created in the 1970s, the result of cross-breeding Mauritanian touabir and Malian bali-bali sheep.

Photographer Sylvain Cherkaoui first learned about the breed during the early days of the COVID-19 pandemic. His fascination has since culminated in a recent series of portraits in which Cherkaoui featured an assortment of beloved pet Ladoum sheep alongside their proud owners.

As for what might account for the dizzying price hike of certain Ladoum sheep, Cherkaoui explained that factors such as the “size and weight of the sheep, the shape and symmetry of the horns, the curve of the muzzle, and the size and symmetry of the testicles” are taken into account. And it would seem that even sheep are subjected to unpredictable, often fluctuating beauty trends: those that secure the top spot of the annual televised beauty pageants in Senegal exert tremendous influence over which look will be most coveted in the following year’s contestants. “The beauty criteria [varies] based on the appearance of the winner of the last competition,” said Cherkaoui. 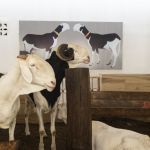 According to The Guardian, “substantial prize money,” not to mention prestige, is up for grabs in such pageants. Alas, the sheep themselves have been long regarded as up for grabs by criminals who couldn’t help but take note of the high prices that some often sell for.

Ladoum are “valued as highly by breeders as by thieves,” as noted by one breeder in the documentary Ladoum: Senegal’s Star Sheep via Al Jazeera, citing an “international network of Ladoum thieves” who have been known to carry out armed robberies on Ladoum farms. One such farmer noted a theft of 33 Ladoum sheep in 1997, forcing the man to move to a more residential area where more effective security measures were available.

The reverence and love shown for these animals continues to run strong in Senegal several decades after they first originated, suggesting the breed’s popularity has elevated their status far above a mere passing fad, to something infinitely more iconic. Cherkaoui’s portrait series artfully encapsulates the significance of the breed to the Senegalese. He said, “When I explained my exhibition project [to people] and that I was going to put their Ladoums under the spotlight, they felt proud and valued.” It certainly shows.