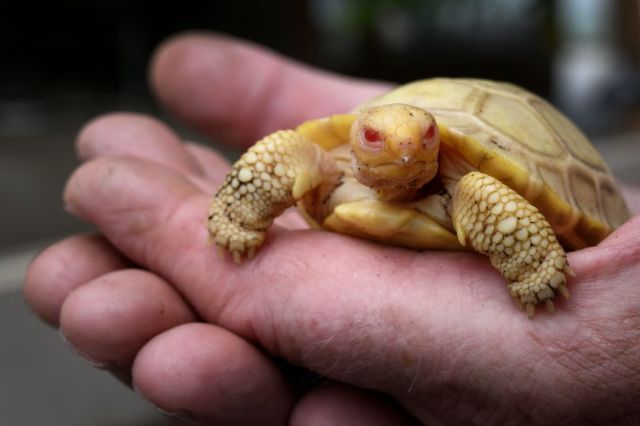 A rare albino Galapagos giant tortoise has made its public debut at a Swiss zoo. This unique baby reptile hatched on May 1 in an incubator at the Tropiquarium, a zoo in Servion, Switzerland, Reuters reports.

The young animal, which debuted earlier this month, also has a sibling that hatched a few days later, on May 5, but the second baby tortoise displays the standard black coloring of its parents.

“This is the first time in the world that an albino Galapagos tortoise has been born and kept in captivity,” the Tropiquarium said in a statement. “No albino individuals have ever been observed in the wild.”

For all turtle species, only about 1 in every 100,000 is albino, and the mating success rate for this particular one is around 2-3%, making the hatching that much more remarkable.

The event was the second hatching they have ever had at the zoo, staff member Thomas Morel told Reuters. “We were quite surprised by the tortoise’s color,” he recalled. “It can happen at birth, but after two days, we were sure it was an albino when it pointed the tip of its head, so it was really surprising for this species, it’s quite extraordinary.”

There are 15 living species of Galapagos tortoises, according to the Galapagos Conservancy. The reptiles are long-lived — the oldest on record reached the incredible age of 175 — and quite massive, with some exceeding five feet in length and 500 pounds in weight.

The species is native to the Galapagos Islands, an archipelago off of Ecuador, where it’s believed that the species population was once in the hundreds of thousands. In fact, the tortoises were so plentiful that the Galapagos Islands are actually named after them. “The old Spanish word galapago meant saddle, a term early explorers used for the tortoises due to the shape of their shells,” the conservancy website reads.

Only about 20,000–25,000 or so remain in the wild today and many of the tortoise’s subspecies are listed as either endangered or critically endangered by the International Union for Conservation of Nature.To see more of the remarkable albino baby (and its equally adorable sibling), check out this video on CNN.