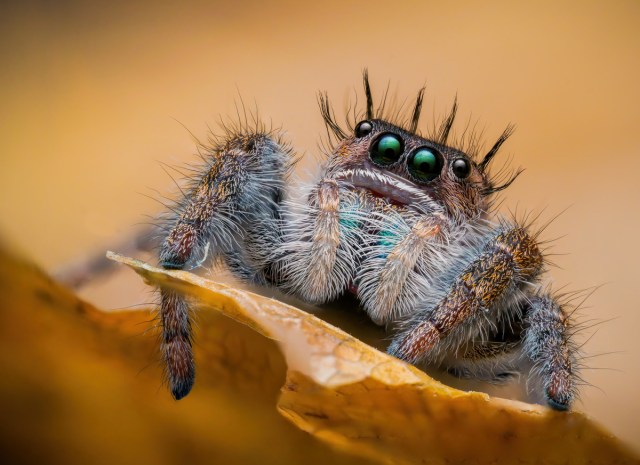 Much like the intricate and beautiful webs spiders create in waking life, their minds may spin dreams.

New research led by behavioral ecologist Daniela Roessler at the University of Konstanz in Germany shows that jumping spiders (evarcha arcuata) experience a sleep-like state with muscle twitches and rapid-eye-movements (REM) similar to those observed in dreaming humans.

Roessler usually does field work abroad, but became fascinated by jumping spiders in a field near her home in Trier, Germany, during the COVID-19 lockdowns. She noticed that the creatures — about the size of a pinkie fingernail and with cartoonishly large eyes — retreated at night into tiny silken pouches or would dangle upside down from a solo silk string, their bodies occasionally in motion.

“The way they twitched just made me think of dogs and cats dreaming,” Roessler told National Geographic.

After bringing them to her lab, Roessler and her research team started recording 34 jumping spiders that appeared to be sleeping at night using a magnifying glass and infrared camera. They all had bouts of retinal and limb movements, The New York Times reports, that are hallmarks of REM states, which have been widely observed in most mammals, along with some birds and a reptile.

The movements, including wiggling their abdomens and curling and uncurling their legs, lasted about 80 seconds and recurred every 15 to 20 minutes.

“Occasionally, there are things happening that I can only explain with the theory of them having a nightmare,” Roessler told National Geographic, explaining that sometimes suddenly “all the legs get extended at the same time, like aah!”

To confirm the rapid eye movements, Roessler’s study subjects consisted of baby jumping spiders. They have translucent exoskeletons, making it possible to observe movement of the tubes that control the position of their retinas inside their heads.

Beyond REM sleep, they seemed to exhibit other sleeping behaviors: they’d stop to stretch and would also adjust their silk lines.

There’s still more work to be done to confirm the dreaming theory — scientists will need evidence that the spiders are actually asleep instead of just in a sleep-like state, and that their brains are active during these REM-like phases. Some scientists have already successfully placed an electrode “into the brain of a different jumping spider species,” according to Scientific American.

Roessler said it would also be helpful to demonstrate that the spiders “are less arousable, or slower to respond to stimuli, and need ‘rebound sleep’ if they’re deprived,” National Geographic reports.

To some researchers, spiders that dream aren’t as far-fetched as they may seem.

“It wouldn’t surprise me at all if [jumping spiders] have dreams,” behavioral ecologist and spider researcher Lisa Taylor told Scientific American. “They live in such a rich sensory world, and we know they have amazing cognitive capabilities and memory.”

In addition to being a major development for animal sleep research, the philosophical implications of spiders being able to dream could alter the way people view and engage with the natural world.

“If they dream, I mean, what can you do? You cannot smush a spider that dreams,” Roessler told National Geographic.