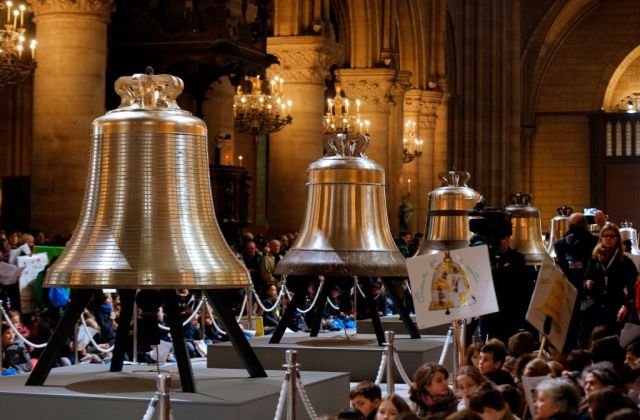 After a devastating fire tore through the 859-year-old Notre Dame Cathedral in Paris in 2019, the sounds of its 10 bronze bells ceased to echo through the city. They’d escaped damage but have been rung only once since — on April 15, 2020, the one-year anniversary of the blaze. Then the chapel returned to silence, with restorers working diligently toward their goal of reopening the landmark in 2024 for the public to enjoy.

But Bill Fontana, an experimental sound artist from California, didn’t want to wait that long, and he didn’t think the rest of the world should either. So he set out to share the sound of the cathedral’s bells again, not by ringing them but by recording the imperceptible sounds their vibrating metal creates when not in motion.

The resulting sonic installation is entitled Silent Echoes: Notre-Dame. “It’s a physical fact that these bells are actually vibrating all the time, it’s like a spirit that’s living inside of Notre Dame. It’s not dead, it’s alive,” Fontana told The Art Newspaper, “It’s the voice, soul, the breath of the bell.”

By affixing a device called an accelerometer to each of the cathedral’s 10 bells, Fontana was able to record the harmonic pitches emitted through each bell’s vibrations. He then mixed those pitches together, adjusting the levels to be audible to human ears.

“The bells are acting basically like acoustic mirrors. They’re reacting to life around Notre Dame,” Fontana told Artnet. The resulting soundscape is evocative and visceral. The slow and prominent hum of the massive bells rings in the foreground, and ambient sounds of the surrounding area flitter in the background — the noise of construction in the cathedral, a musician’s melody from the street below, birds singing in the bell tower. “The personality changes with the weather and the time of day,” he said.

Fontana began working with the Notre Dame bells in 2021, first affixing an accelerometer to Emmanuel, the cathedral’s oldest bell and the only one to survive the French revolution, when the others were melted down to create cannon balls. Emmanuel was recast in 1681 and rings in F-sharp.

His work with the Notre Dame bells isn’t the first time Fontana has created sonic art from natural and human-made wonders, though. His prior sound sculptures use information from sources like the deserts of Abu Dhabi, the foghorns of San Francisco, and the beaches of Miami.

He began live-streaming Silent Echoes: Notre-Dame in June at the Centre Pompidou in Paris, and he hopes to exhibit the piece around the world, potentially adding live video as well.

“With a live-streaming artwork, it would be possible to set up spontaneous pop-up exhibitions anywhere,” Fontana told Artnet. He already has plans to bring the soundscape to Istanbul for a solo exhibition and to Austria as part of the Ars Electronica music festival in September. “I’ve spent so many hours of my recent life listening to these bells,” Fontana said. “It’s this very beautiful, almost mystical sound.”