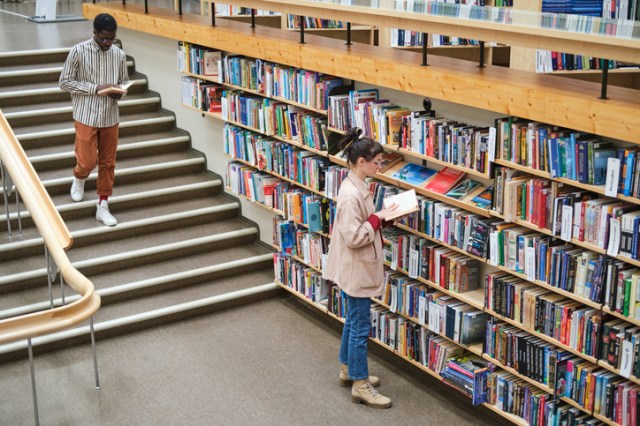 Have you ever wondered about whose scrawl is in the margins of your library book, or read a note on the inside cover and imagined who it was for? Sharon McKellar’s collection is for you. The librarian compiles items left on shelves and in library books across Oakland, California — from Post-It notes to bus tickets, love letters, postcards, photographs, and more — and uploads them to an online database called “Found in a Library Book.”

“I had always collected little things I’d found in library books and I knew other people did that too,” McKellar told NPR, later adding, “It lets us be a little bit nosy. In a very anonymous way, it’s like reading people’s secret diaries a little bit but without knowing who they are.”

She began the library collection about 10 years ago, taking inspiration from Found Magazine. That publication was started by a Chicago man back in 2001, after he found a mysterious note on his windshield that was seemingly left for another person. In each issue, the magazine features found notes, pictures, and other memorabilia submitted by readers across the globe.

While McKellar’s project is not quite so widespread, including only finds from within the Oakland Public Library system, her collection is perhaps equally intriguing and diverse. As of August, there were more than 350 items and counting.

RELATED: Independent Bookstores in US Are Thriving and Diversifying Post-Pandemic

One notable find is a fake $100 bill, printed specifically to celebrate the 100th birthday of a woman named Mary. It boasts an image of the centenarian, along with the words “In Mary We Trust.” Another intriguing keepsake? This 1990 “Book of Days” planner, complete with written entries under certain dates, and photographs of models sporting the fashion of the time.

Other notes the librarian has archived are sweeter and simpler, like the yellow, heart-shaped Post-it written to a child named Alisha. It reads: “Sweet dreams my love bug. Have a good night and sleep well,” and is signed with love from “Mama & Daddy.”

Speaking to NPR, McKellar explained that the project’s fun lies in the imagined life behind each artifact. In the future, she hopes the library will hold a writing contest where people can submit short stories that go along with the items.

“I like imagining where these came from,” McKellar told Reuters in September. “It just feels like a really interesting archive of our community, of the city and the people who use our libraries and the diversity within those, and just kind of a glimpse at humanity and who we all are and how we’re all connected.”