Meet the 12-Year-Old Who Invented an Edible Water Bottle: “My Biggest Inspiration Was Wanting to Help the World”

Across the world, humans purchase around 1.3 billion single-use plastic water bottles a day. Because only about 9% of plastic is recycled, the vast majority of those bottles — 22 billion a year by some estimates — wind up in landfills, the ocean, or elsewhere in nature.

When beach-loving Madison Checketts began noticing many of those plastic bottles littering the shoreline during her family’s trips to California, the 12-year-old “just felt like this needed to change,” she told Smithsonian Magazine.

So as she began thinking about what to do for her school science fair in Eagle Mountain, Utah, back in 2021, the idea of a project centered on reducing plastic pollution quickly came to mind. During her research, Madison came across a website about “reverse spherification,” the process of enclosing a liquid within a gel membrane that had gained steam in the culinary world decades earlier. That’s when the lightbulb went off for her: She would design an edible water bottle called the Eco-Hero. 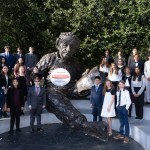 To bring her idea to life, Madison built upon the already established reverse spherification method by experimenting with common food additives. She also took inspiration from previous iterations of edible water bottles, though she focused on making hers bigger and more durable. She found that the combination of water, lemon juice, calcium lactate, xanthan gum, and sodium alginate resulted in a gel pouch that wouldn’t break, could hold up to 3/4 cup of water, and would last in the fridge for three weeks.

The project earned her a spot in the district science fair —and she went on to take first place in the state science fair, according to Smithsonian. This year, she was one of 30 finalists in the Broadcom Masters, a nationwide STEM competition for middle school students.

“One of my biggest inspirations for my project was wanting to help the world,” the ambitious young inventor said in a video on the program’s website.

Though she’d like to improve the Eco-Hero by making it resealable and able to hold more water, she believes her current iteration would work well as a replacement for the paper cups used by runners in races. All one needs to do is bite a hole in the membrane, drink the water, and then eat the pouch or throw it away to biodegrade.

As a finalist, Madison was awarded $500 for the concept. The competition’s top prize went to 14-year-old Thomas Aldous, who invented a robotic hand for use in situations that may be too dangerous for humans, such as natural disasters. Other winning projects focused on understanding human memory and honeybee conservation.

Madison hopes the Eco-Hero inspires others to take better care of the planet. “It doesn’t necessarily have to be in a big way,” she told Smithsonian. “[People] can still make a difference in the world, even if it’s just in a small way.”

And if being a rising star in the science world and a sustainability warrior weren’t enough, last year Madison was named “kindest friend” award by her sixth grade class. She’s definitely going places.