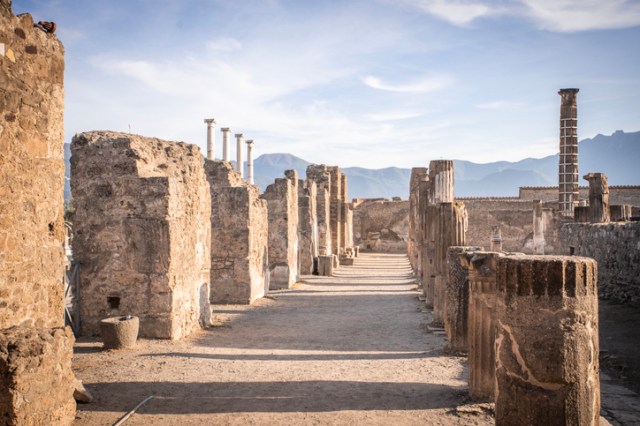 When Mount Vesuvius erupted in 79 A.D., the citizens of Pompeii took the secrets of their lives and what happened that tragic day to their graves. But a team of researchers from Denmark and Italy has been able to find answers in extracted DNA from the bones of a man and a woman who lived in the ancient city. Using the male’s DNA, scientists successfully sequenced the first complete human genome of a Pompeii resident.

The bodies of the two people were first discovered in 1933, in a Roman townhouse located south of what is now Naples, Italy. Archeologists found their hardened and ash-encased bodies sitting in a dining room, the BBC reported. Once removed from the site, the skeletons were kept extremely well-preserved.

That preservation, along with the latest technology, led scientists to believe they could extract DNA from the bones, something previously not thought possible. They were right. While the woman’s DNA sequence had gaps in it, the team was able to successfully sequence the man’s entire genome, and published their findings in Scientific Reports in May.

“Our study demonstrates the power of a combined approach to investigate ancient humans and confirms the possibility to retrieve ancient DNA from Pompeii human remains,” the authors wrote.

By comparing the man’s DNA to that of 1,030 ancient humans and 471 modern individuals, the team found that his DNA shared the most similarities with modern people from central Italy, as well as contemporaries in the Roman Imperial Age. They also identified genes in the man’s genome that are frequently found in Sardinia, though not among people who lived in Italy during the Roman empire. This suggests there may have been “high levels of genetic diversity across the Italian peninsula at that time,” according to The Guardian.

Additionally, researchers performed osteological examinations on both skeletons. They determined that the man was 35-40 years old, around 5’4” tall, and may have had tuberculosis before his death. The woman was over the age of 50, stood at just over 5’ in height, and showed signs of osteoarthritis.

The breakthrough study opens the door to much more research on the inhabitants of Pompeii. Other genomes can be studied in the future in the hopes of learning more about what life was like in the ancient city, which was both a holiday destination for the wealthy and a port-city teeming with business and trade.

“These people are silent witnesses to one of the most well-known historical events in the world,” one of the study’s co-authors, Dr. Serena Viva, told BBC Radio 4’s Inside Science. “To work with them is very emotional and a great privilege for me.”