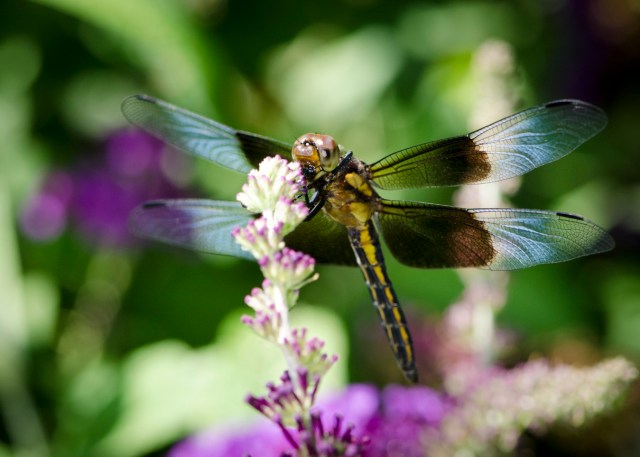 Last month, at the annual meeting of the British Ecological Society, some fascinating preliminary research from an as-yet-to-be-published study was shared, revealing that certain animals perceive time differently than humans do. In particular, some small animals, flying species, and marine predators experience time at a much faster rate.

The study, according to Popular Science, analyzed temporal perception — the rate at which changes are perceived in the world — in 138 species, and discovered animals with “fast-paced lifestyles” can detect changes at much higher rates than average.

Dragonflies boast the highest rate of detecting change: Their vision equips them to see changes 300 times per second, or 300 hertz. A bird known as a pied flycatcher has the fastest eyes in the vertebrate kingdom, boasting a rate of 146 hertz, while the vision of dogs was measured at 75 hertz. In contrast, humans can only detect changes 65 times per second (65 hertz). Not surprisingly, a faster rate seems to have evolved in species that need it most.

Kevin Healy, an ecologist from the University of Galway in Ireland who presented the research, explained to the outlet: “Having fast vision helps a species perceive rapid changes in the environment. Such detailed perception of changes is very useful if you move quickly or need to pinpoint the trajectory of moving prey.”

Interestingly, when it comes to predatory animals, land-based ones perceive time more slowly than aquatic ones.

“We think this difference may be because in aquatic environments predators can continuously adjust their position when lunging for prey,” said Healy, “while in terrestrial environments, predators that lunge at prey, such as a jumping spider, are not able to make adjustments once they’ve launched.”

When it comes to terrestrial environments and the species that operate within them, it seems that even among humans, some variation in the perception of time can occur.

Data from a number of flickering light experiments provided key data for measuring time perception. In such an experiment, the rate at which the optic nerves of the eye send information to the brain is measured with electroretinograms, which in turn measure something known as “critical flicker fusion frequency,” per Popular Science. This frequency essentially measures how quickly the rate of a light flashing may be detected.

“By looking at such a wide range of animals, from dragonflies to starfish, our findings show that a species’ perception of time itself is linked to how fast its environment can change,” said Healy, who noted that it furthers humans’ understanding of interactions among animal species and how light might affect them.