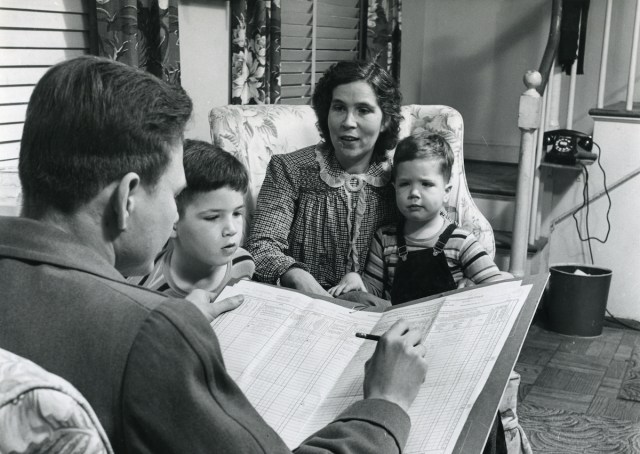 Newly released census data is taking us back in time — all the way to 1950. This April, the National Archives and Records Administration released information on the 150.7 million people counted in the 1950 census. By law, census records must remain private for 72 years, making this a once-in-a-decade event.

“This is genealogy heaven when a census is rolled out,” Matt Menashes, executive director of the National Genealogical Society, told CBS News. “People are waiting anxiously. It’s hard to overstate.”

The eagerly-awaited data reflects the efforts of 150,000 census takers, who knocked on doors in cities, suburbs, and rural areas to poll residents and record answers by hand, Time reported in November 1950. The three-year endeavor marked the last time that method served as the primary means of collection. Beginning the following decade, streamlined self-enumeration forms would be mailed to residents to be completed and returned, though field operations are still in place to perform follow-ups when required.

In 1950, the basic census questionnaire comprised 20 items, including age, occupation, marital status, and place of birth, while more detailed inquiries were reserved for a sampling of the population randomly selected to represent the larger demographic. The complete list provides a fascinating look into life at the time; for example, one question asks, “​​If male, did he ever serve in the U.S. Armed Forces during World War I, World War II, or any other time including present service?” and another, “Was he living on a farm a year ago?”

Now that officials have populated the more than 3 billion total answers into a specially designated website, amateur genealogists can search for relatives and use the information to help construct family trees — while hobbyist historians may simply enjoy perusing the quotidian past.

The National Archives and Records Administration is also encouraging database visitors to submit corrections to the name index, as the technology used to digitally transcribe the handwritten forms is not always 100% accurate. The federal agency recommends this article to help with searching, according to The New York Times.

“This is the Super Bowl and the Olympics combined, and it’s only every 10 years — it’s awesome stuff,” Menashes told the outlet. “What’s so great about these points of data is that it helps you paint a picture — not just relationships, but what society was like.”