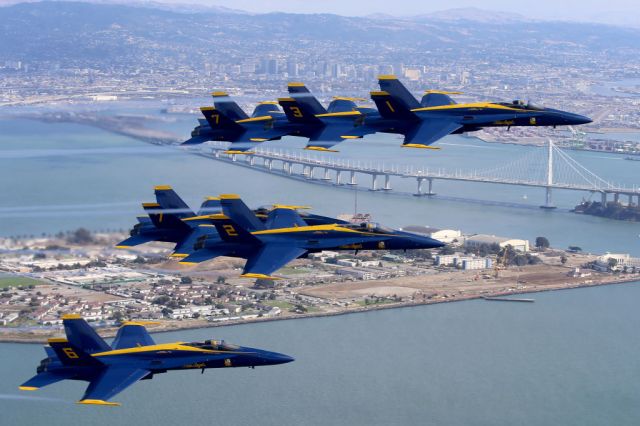 Besides being able to maneuver a Super Hornet strike fighter jet at speeds over 1,200 mph, Lt. Amanda Lee has achieved the distinct honor of becoming the first woman ever to do so with the famed Blue Angels’ aerial acrobatic team.

One of six new recruits to the U.S. Navy’s famous flight show team, Lee beat out an “overwhelming number of applicants from all over the globe,” Capt. Brian Kesselring,  Blue Angels’ commanding officer and flight leader, said in a press release.

Blue Angels made its debut in 1946 in a bid to heighten public interest in naval aviation and boost service people’s morale. Today, the team comprises a rotating roster of 154 active-duty sailors and marines and continues to thrill spectators at its airshows every March through November.

Lee is currently a member of the Strike Fighter Squadron 106 flight demonstration team — also known as the Gladiators — stationed at the Naval Air Station Oceana in Virginia Beach, Virginia. According to NBC News, the pilot is expected to report for training with the Blue Angels this coming fall.

Prior to performing Diamond Rolls and Vertical Breaks in the sky, Lee worked at UPS while attending the University of Minnesota in Duluth, USA Today reported. She enlisted in the navy as an aviation electronics technician, graduating from training in 2007. In 2016, she was designated a naval aviator, and in 2019, she flew in the first all-female flyover for the funeral of retired Navy Capt. Rosemary Mariner, one of the first female Navy jet pilots.

Paying homage to the predecessor who helped pave the way for people like Lee, she commented in 2019: “Capt. Mariner really was the starting point of female aviation. She’s one of the first eight original female pilots allowed in the Naval pipeline … young kids growing up and not thinking whether they can do something or not because of their race, gender, ethnicity; they just go out and say, ‘This is what I want to do.’ … It kind of all starts back with Capt. Mariner and some of the doors that she broke down.”

While she recognizes and appreciates the servicewomen who came before her, including the hundreds who served in Blue Angels in other ways, including Katie Higgens Cook who became the organization’s first female pilot in 2021, Lee isn’t keen to put her gender at the forefront. First and foremost, she sees herself as a pilot. “When I come into the ready room right now, I’m a pilot first, a person second, and my gender really isn’t an issue,” she said.