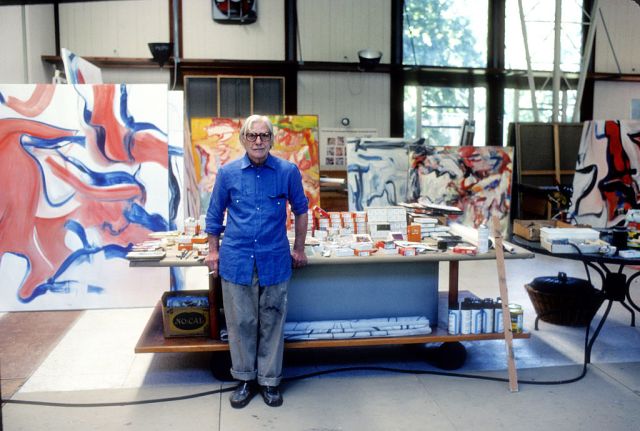 Willem de Kooning’s famed painting “Woman-Ochre,” estimated to be worth around $160 million, has had quite the journey over the years. On the morning after Thanksgiving Day in 1985, the artwork was ripped from its frame at the University of Arizona Museum of Art (UAMA). It remained missing for three decades — finally resurfacing in New Mexico in 2017. Now, after a complex and arduous restoration process in Los Angeles, the beloved abstract-expressionist piece is finally returning home.

The painting is thought to have been stolen by a retired married couple, a theory that emerged when it popped up at an antique shop that had acquired items from the pair’s estate after their deaths. It was badly damaged, but not enough to evade the eye of an astute customer who suspected its real worth and offered to buy it for $200,000, CNBC reports.

Startled by the sum, and unaware that he was in possession of a world-renowned masterpiece, shop owner David Van Auker decided to investigate. After discovering details of the decades-old theft on the internet, he knew he had to contact UAMA. Curator Olivia Miller remembers overhearing the details of his initial call. “My coworker and I just stopped our conversation and looked at each other,” she shared in a Getty podcast interview. “She said, ‘are we going to remember this moment for the rest of our lives?’”

Not wanting to get her hopes up too quickly, Miller asked Van Auker to provide pictures so she could confirm the identity of the piece. “Every time he sent a photo, we were getting more and more excited,” she recalled, adding, “he said that the painting had lines across it as if it had been rolled up.”

Once confirmed to be the real deal, “Woman-Ochre” was on its way back to the museum. But it wasn’t ready for display just yet — the next step was finding the right experts to restore the damaged painting. In what Miller referred to as “the absolute best scenario,” the Getty Conservation Institute (CGI) accepted the challenge, and the painting was sent to be rehabilitated in California.

Conservators began by analyzing de Kooning’s original materials, mapping the pigments through the use of Macro X-Ray Fluorescence technology, CNN reported. “Every single little paint flake that had lifted up when it was pulled from that canvas during the theft had to be set down under the microscope, in a very painstaking and time-consuming process,” Ulrich Birkmaier, a senior conservator at the Getty Museum, told the outlet.

After years of detailed work, the restoration was complete. “Woman-Ochre” was exhibited at the Getty Center over the summer in a show entitled “Conserving de Kooning: Theft and Recovery.” Now, the painting is being prepared to take up residency in Arizona once again. Eager art lovers will be able to view the piece during a special exhibition at UAMA beginning October 8.

“I’m just overwhelmed by the honesty and the goodness of the people who found the painting and who did the right thing, right away,” Miller told CNBC. “And that feeling is just as wonderful as having the painting actually back in the museum.”