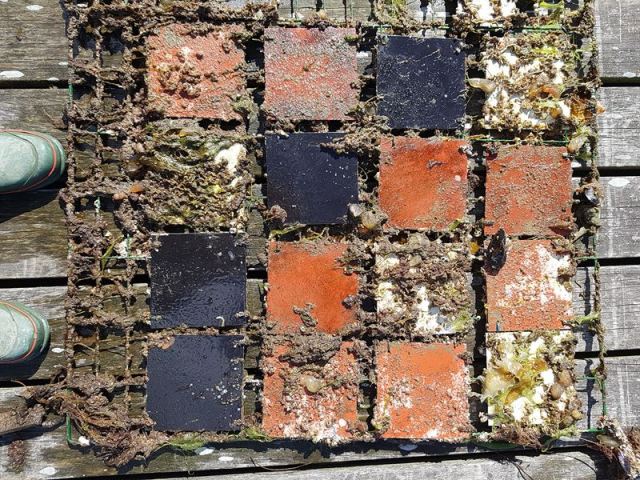 Mussels, the small mollusks often enjoyed alongside French fries at seafood restaurants, can be delicious — but also dangerous, for ships at least. These marine organisms are one of the biggest culprits of “fouling,” which is when a boat’s integrity can become compromised due to the buildup of mussels and other living things like algae and barnacles. Once attached to the hull of a vessel, they are not only difficult to remove but can cause damage and slow it down.

That’s why anti-fouling paint exists. It discourages organisms from attaching to the hull and usually kills those that do. However, copper-based paints are toxic, containing biocides that pollute the water and harm local ecosystems. In fact, as much as 40% of copper inputs to the Baltic Sea come from the paints, according to a press release from Chalmers University of Technology in Sweden, and the heavy metal sticks around for decades.

So, researchers at Chalmers, in partnership with the University of Gothenburg and the IVL Swedish Environmental Research Institute, tested an alternative: biocide-free, silicone-based anti-fouling paint. Their study, published in the Marine Pollution Bulletin in November, was carried out over a year in the Baltic Sea and the Skagerrak, a connected strait. The team found that the eco-friendly paint not only worked, but it was effective over a longer time period.

“We actually left our test panels at one of the test sites. These have now been under the surface for over two years. We can see that the silicone paint still works well and, more importantly, works better than the copper paint,” said co-author Maria Lagerström, a marine environmental science researcher at Chalmers. Silicone coating is slippery enough for most marine organisms not to stick, and those that do eventually fall off as the ship moves.

The reason this alternative hasn’t been used already, despite being available for years, per Popular Science, is because the maritime industry “has been slow to adopt the paint.”

“Both the shipbuilding industry and the leisure boating sector have one thing in common: they are highly traditional,” Lagerström said in a statement. “People like to use the products they are used to, and they are also skeptical as to whether non-toxic alternative solutions really work.” As of 2014, silicone-based paints only made up 10% of the market for shipping vessels, the media release notes, though it had increased from 1% in 2009.

While they are certainly less toxic than copper, silicone anti-fouling paints “may not be completely environmentally benign,” the study noted. “Nonetheless, [foul-release coatings] are substantially less toxic compared to biocidal antifouling coatings and their use should be promoted.” The team encouraged further research on the paint, but it’s still a big step forward for keeping our seas, and the ships that sail them, safe and healthy.